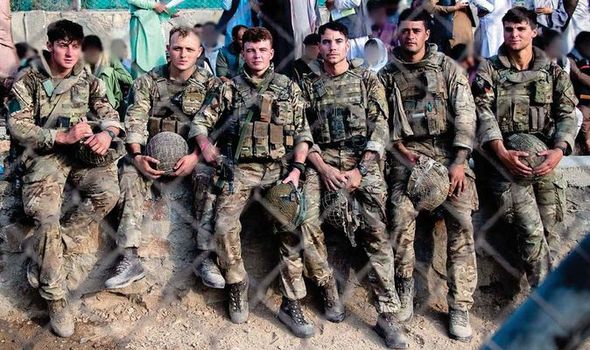 At an online summit, the Prime Minister is to call for a joint approach to try to preserve progress made since the allied invasion 20 years ago. He will urge counterparts to catch up with the UK’s pledge to welcome thousands of Afghan refugees and double annual aid.

The Prime Minister spoke to President Joe Biden last night but Washington refused to commit to extending the August 31 deadline for the evacuation.

But Downing Street said the leaders agreed a major diplomatic push is needed to prevent a humanitarian crisis.

A spokesman said: “They discussed the efforts by the UK and US to coordinate the rapid and safe evacuation of our nationals and those who previously worked with our governments from Kabul international airport.

“The leaders agreed to continue working together to ensure those who are eligible to leave are able to, including after the initial phase of the evacuation has ended.”

Today Mr Johnson will chair the discussion on the race to get out of Kabul and the long-term future of the war-torn nation.

The PM said: “Our first priority is to complete the evacuation of our citizens and those Afghans who have assisted our efforts over the last 20 years.

“It’s vital we come together as an international community and agree a joint longer-term approach.

“That’s why I’ve called an emergency meeting of the G7 ‑ to coordinate our response to the immediate crisis, to reaffirm our commitment to the Afghan people, and to ask our international part- ners to match the UK’s commitments to support those in need.

“We will use every humanitarian and diplomatic lever to safeguard human rights and protect the gains made over the last two decades.

“The Taliban will be judged by their deeds and not their words.”

Following the takeover by the religious zealots last week, the UK Government swiftly announced one of the most generous refugee resettlement programmes in British history with an offer to welcome up to 20,000 vulnerable Afghans.

Ministers also doubled annual aid to Afghanistan by committing up to £286million immediately.

The general secretaries of Nato and the United Nations will join the meeting along with European Union and European Commission representatives.

G7 heads are set to sign a pact to safeguard progress made in Afghanistan over the last two decades including on human rights, girls’ education and the rights of women and minorities.

Mr Johnson chaired a meeting of the Cobra emergency committee yesterday to discuss the evacuation of UK nationals and their dependants, embassy staff and Afghans.

Opposition leaders at Westminster last night urged him to work for more generous support for refugees.

Labour’s shadow foreign secretary Lisa Nandy said: “This virtual G7 meeting is a make or break test of the Prime Minister’s ability to bring together international partners, rise to the occasion and show leadership.”

She said the UK Government must demand that “as many people as possible have safe passage out by prioritising efforts to extend the air bridge out of Kabul beyond August 31”.

She also called for a global agreement to deal with the refugee crisis by working with neighbouring countries to keep borders open and “a strategy for supporting those who will be left behind”.

Ms Nandy added: “The Prime Minister has had eighteen months to plan for this ‑ the world’s eyes are on this meeting.”

Lib Dem leader Sir Ed Davey said: “Our brave soldiers at Kabul airport are protecting Afghans and UK nationals from not just the Taliban, but the threat of terrorist attacks.

“So at the G7, the challenge for the Prime Minister is this: will the UK be at the forefront of a concerted global effort to keep our citizens safe and stop a new terror threat reaching our shores?

“It is also vital that those Afghans who cannot make it to Kabul airport are nonetheless supported in their attempts to leave.

“If we cannot evacuate Afghans, the least we can do is work with the international community ‑ especially neighbouring countries such as Pakistan ‑ and use every diplomatic lever possible to try and secure a safe route out for those who wish to flee the Taliban.”