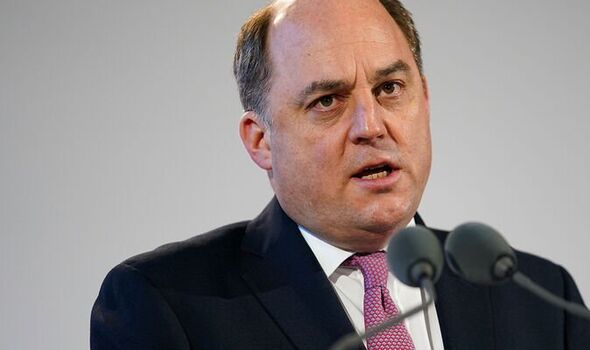 Defence Secretary Ben Wallace said urgent supplies being rushed from the UK could also include missiles to target Russian jets.

He told MPs that Ukrainian President Volodymyr Zelensky’s people “are fighting for their very survival.” He added: “His country is united against the aggression – and it is indeed his country’s darkest hour.”

Referring to Moscow despot Vladimir Putin, Mr Wallace said: “If he wants to further his case as a great leader, he’s now contained in a cage of his own making.”

Mr Wallace said the Government was bound by the decision to supply defensive systems and not escalate the war.

But he pledged ministers would deliver more equipment to protect civilians from air attacks and military bombardment after agreeing to send 2,000 new light anti-tank weapons, smaller arms and ammunition in January. He added: “As the conflict intensifies, the Russians are changing their tactics and so the Ukrainians need to too.We can all see the horrific devastation inflicted on civilian areas by Russian artillery and air strikes – indiscriminate and murderous.

“It is vital therefore that Ukraine maintains its ability to fly and to suppress Russian air attack. As of today, we will have delivered 3,615 NLAWs (anti-tank missiles) and will continue to deliver more. We will shortly be starting the delivery of small consignments of anti-tank Javelin missiles as well.”

He added: “The Government has decided to explore the donation of Starstreak highvelocity manned portable anti-air missiles.

“We shall also be increasing the supplies of rations, medical equipment and other non-lethal military aid.”

It follows evidence the Russian invasion is increasingly bogged down. One Western official said: “They are tightening their grip in some areas, but there’s been minimal progress for the last 24 hours.”

Mr Wallace said the estimated number of Ukrainian civilians killed or injured is more than 1,000. But he added: “The true figure is expected to be much higher and I’m afraid worse is likely to come.

“So the UK will increase its funding for Ukraine to £220million, which includes £120million of humanitarian aid.”

Western allies needed to stand up to Putin’s bullying, Mr Wallace said. He told MPs: “As long as we stand united, both as a House and as the international community, then the Kremlin’s threats cannot hurt us.

“I know many of our constituents and our colleagues are fearful of what happens next. Putin and the Kremlin continue to threaten countries who offer help to Ukraine. Their military campaign will, I’m afraid, get more brutal and more indiscriminate. But it is my firm belief that our strength to stand up to such bullying comes from our alliances.

“We should take strength from the peoples across Europe who are standing shoulder to shoulder to protect our values, our freedom, our tolerance, our democracy and our free press. That is our shield.” Fourteen nations have sent arms. They include Sweden and Finland – which both have a long history of neutrality – who sent anti-armour kit.

Germany has sent around 1,000 anti-tank weapons and 500 US-made Stinger missiles.

Foreign Secretary Liz Truss will today call for a tougher and more united response from Western allies to global threats after Putin’s flouting of international law in Ukraine.

In a keynote speech in Washington, the Cabinet minister will argue the world must stop Putin in Ukraine or risk emboldening Russia and other aggressors.

She will also say the invasion will shake the global order as the 9/11 attacks did and that “the era of complacency is over.”

She will add: “If we let Putin’s expansionism go unchallenged it would send a dangerous message to would-be aggressors and authoritarians around the world. We can’t allow that to happen.” Yesterday she said the West had skimped on defence for years but must now spend more.

At a press conference alongside US Secretary of State Antony Blinken, she said: “As well as conventional defence we need to step up efforts in areas like information.”

British soldiers were yesterday warned not to join the battle – after a Coldstream Guard, 19, fled his Windsor post to fight the Russians. He wrote to his parents before booking a one-way ticket to Poland with an intention to cross the border into Ukraine.

Friends claim he has since posted a picture of his boots, indicating he may have already joined defending forces. But defence chiefs are still trying to intercept him, and three others, amid fears Russia could claim Britain has entered the war if UK troops are caught.

Mr Wallace told the Commons the four soldiers will be prosecuted when they return for going absent without leave or deserting.