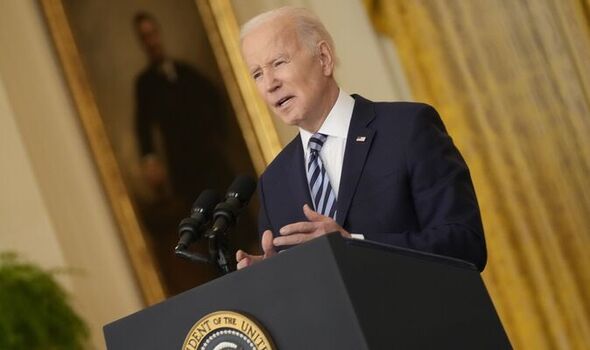 Announcing unprecedented sanctions, targeting Russian elites, top banks and technology exports, the US President said: “Putin is the aggressor. Putin chose this war. “And now he and his country will bear the consequences.” But Mr Biden refused to say if he has appealed to China to isolate Putin, saying: “I’m not prepared to comment on that at the moment.”

China’s government yesterday offered a subtle nod in support of the Kremlin and appeared to blame the US for the Russian attack on Ukraine.

When asked to define the situation as an “invasion” assistant Foreign Minister Hua Chunying repeatedly avoided it. But she did say: “The US has been fuelling the flame.”

Though not military allies, China and Russia have been presenting an increasingly united front in the face of what they view asWestern interference in their affairs.

Mr Biden also warned Putin “has much larger ambitions than Ukraine” saying he “wants to, in fact, reestablish the former Soviet Union”.

Other world leaders reacted with outrage to the invasion. Nato Secretary General Jens Stoltenberg branded it a “reckless attack”.

UN Secretary-General Antonio Guterres urged Putin to pull back his troops to avoid starting in Europe “what could be the worst war since the beginning of the century.”

Georgia, which fought Russia in 2008 over disputed regions, backed Ukraine and said the invasion would have “dire consequences” for the international community.

Lithuania president Gitanas Nauseda said he was going to impose a state of emergency.

A similar decree was issued by Moldova, which also said it would accept tens of thousands of Ukrainian refugees. Romania will take half a million. Poland is also setting up refugee reception points.

South Korea and Japan condemned the attack. Japan also said it would join international economic sanctions.Australia said it will expand those it has already enforced.

Russian ally Belarus said it was not taking part in the military action, but would consider it if asked.

Iran called for a political solution and blamed Nato for the crisis.