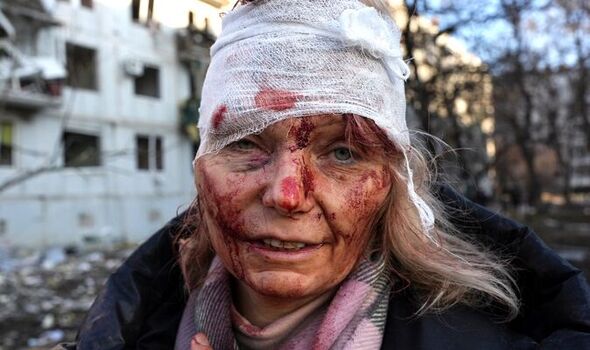 By his act of cataclysmic. unprovoked violence against Ukraine, Vladimir Putin seeks to extinguish the light of freedom across our continent. As the bombs rain down on innocent civilians, he now stands exposed as monstrous dictator, whose megalomaniacal contempt for humanity puts him among with the worst despots of modern history like Hitler, Stalin and Mussolini.

In the Prime Minister’s vivid phrase, this exercise in brute military power is nothing more than an attempt to “redraw the map of Europe in blood.”

He must now be allowed to succeed in his imperialist mission of conquest. If he triumphs, autocracy will replace democracy, liberty will give way to oppression.

The whole region will live in fear of the rumble of Putin’s tanks, the scream of his missiles, the roar of his aircraft. That is why every nation in Europe and the Free World must take a stand against him. The peace of every citizen is in peril. We must have the courage to stand up for our civilised values.

The Prime Minister labelled the Russian tyrant “a bloodstained aggressor” as dozens were killed when his missiles rained down on cities across the beleaguered country and columns of tanks broke through the border.

At least 57 Ukrainian soldiers and civilians were killed in the initial battles, with 169 wounded, the country’s health ministry reported last night.

At Westminster, Mr Johnson told MPs that Putin “will never be able to cleanse the blood of Ukraine from his hands” – and warned Russia’s president may face international war crimes charges over the invasion.

He described the onslaught as a “hideous and barbarous venture” and urged Western allies to combine in a mission “diplomatically, politically, economically – and eventually, militarily” – to ensure Putin fails.

To punish and isolate his Moscow regime and its super-rich cronies, the PM announced the “largest and most severe package of economic sanctions that Russia has ever seen.

“We will continue on a remorseless mission to squeeze Russia from the global economy piece by piece, day by day and week by week.” Mr Johnson warned: “An expansionist power, deploying one of the world’s most formidable military machines, is trying to redraw the map of Europe in blood and conquer an independent state by force of arms.

“It is vital for the safety of every nation that Putin’s squalid venture should ultimately fail and be seen to fail.”

Measures include freezing the UK assets of all Russian banks, a swathe of export bans and a landing bar on planes from Russia’s national airline Aeroflot.

Targeted sanctions will blitz 100 individuals, firms and agencies. Five more oligarchs including a businessman married to Putin’s daughter were hit with travel bans.

A diplomatic source said: “These are people who have international lifestyles. They come to Harrods to shop, they stay in our best hotels when they like, they send their children to our best public schools, and that is what’s being stopped.

“These people are essentially persona non grata in every major Western European capital. That really bites.”

British diplomats were also urging EU leaders to block Russia from the Swift global payments system, to cripple its finances.

The world had watched in horror yesterday as Europe’s largest postwar conflict erupted.

Tanks and tens of thousands of troops supported by attack helicopters and jets swarmed into Ukraine over its borders with Russia and Putin’s puppet Belarus.

A vast human river of refugees fled Kiev to head West, sparking fears of a humanitarian crisis in central Europe as Ukrainian troops fought back fiercely, shooting down Russian aircraft, destroying tanks and inflicting casualties despite being hugely outgunned and outnumbered.

Mr Johnson was woken by aides soon after 4am to be informed the invasion had begun.

He spoke to Ukraine’s president Volodymyr Zelensky, warning him he may need to seek sanctuary in the West, before convening the first of two meetings of the Government’s Cobra emergency committee yesterday and calling world leaders for crisis talks.

The PM said in an address to the nation, left: “This act of wanton and reckless aggression is an attack not just on Ukraine. It is an attack on democracy and freedom in eastern Europe and around the world.”

He told MPs last night that Putin will “stand condemned in the eyes of the world and of history”, adding the time for negotiation was over as the Kremlin was a “pariah” regime.

“I am driven to conclude that Putin was always determined to attack his neighbour, no matter what we did. Now we see him for what he is: a bloodstained aggressor who believes in imperial conquest.”

Mr Johnson said the UK and its allies had a “clear” mission to ensure “this hideous and barbarous venture of Vladimir Putin must end in failure. We will counter the Kremlin’s blizzard of lies and disinformation by telling the truth about Putin’s war of choice and war of aggression.

“We will work with our allies on the urgent need to protect other European countries that are not members of Nato and could become targets of Putin’s playbook of subversion and aggression.”

He added the UK is working with allies to set up a “particular international war crimes tribunal for those involved in war crimes in the Ukraine theatre”. He added in the Commons: “Not just any Russian combatant but anyone who sends a Russian into battle to kill innocent Ukrainians.”

But in a message to the Russian public, the Prime Minister said: “I cannot believe that this horror is being done in your name or that you really want the pariah status that these actions will bring to the Putin regime.

“And to our Ukrainian friends in this moment of agony, I say ‘We are with you, and we are on your side. Your right to choose your own destiny is a right that the United Kingdom and our allies will always defend.’” Mr Johnson said his Government will do everything possible to safeguard Britain from repercussions for the cost of living. “We of course stand ready to protect our country from any threats, including in cyberspace.”

The PM spoke with US President Joe Biden and other leaders of the G7 group of industrialised democracies yesterday plus Nato chief Jens Stoltenberg, telling them Putin was trying to “subjugate the people of Ukraine using extreme violence”.

A No10 spokesman said: “He urged fellow leaders to work together as one to do everything in their power to isolate Putin politically, economically and militarily.”

The G7 leaders said: “This unprovoked and completely unjustified attack on the democratic state of Ukraine…constitutes a serious violation of international law and a grave breach of the United Nations Charter.

“We call on all partners and members of the international community to condemn this attack in the strongest possible terms.”

‘Biden’s fanning flames of war!’ China rages at US as it backs Putin in Ukraine attack

Hua Chunying, a Chinese foreign ministry spokesman, refused to describe the invasion as “an invasion” and said Vladimir Putin has “legitimate security concerns”. She also criticised Washington and Western allies for sending weapons to Ukraine so that Kyiv could defend itself.

“We still hope that the parties concerned will not shut the door to peace and engage instead in dialogue and consultation and prevent the situation from further escalating.

“Rather than hyping up or fanning the flames, have they done enough to prevent the development of the Ukraine situation that we are seeing today?”

She reiterated the need for Russian president Vladimir Putin’s “legitimate security concerns” while calling out the US for sending defence assistance to Kiev.

“The way China acts is not like the US. When we see there is a risk of a conflict, we will not take the initiative and will not provide weapons to the other side.”

She said that Russia is a “major world power” that does not need assistance from the world. But the Chinese diplomat hinted Beijing could cushion Russia from the devastating economic sanctions being imposed by the West.

Beijing has a record of providing economic support to Moscow during Putin’s stand-offs with the west, including in the wake of the Russian annexation of Crimea in early 2014.

“Since 2011, the US has imposed more than 100 sanctions on Russia,” Hua, told reporters in Beijing.

Hua also labelled the US the “culprit” in the Ukraine crisis, “heightening tensions, creating panic and even hyping up the possibility of warfare”.

“China is clearly sympathetic to Russian perspectives,” said Tong Zhao, a senior fellow in the Nuclear Policy Program at the Carnegie Endowment for International Peace, based in Beijing.

“China thinks that it’s the NATO expansion and other threats from the U.S. and NATO” that ultimately prompted Russia to defend “its legitimate interests,” he said. “In other words, I think China feels Russia feels it is forced to do what it is doing.”

“Because Russia is now receiving wide international condemnation and criticism I think China wants to avoid being seen as part of this axis,” Zhao said.

But “when it comes to public statements China has been very careful,” he said. “It’s hard for China to openly support this Russian behaviour given the implications for China’s own security and China’s relationship with Taiwan.”