Ursula von der Leyen said “millions of businesses” across the European Union are waiting on the bloc to provide them with certainty over the union’s next seven-year budget. Officials from Hungary and Poland pulled out of the negotiations on Monday after the Parliament succeeded in pushing through a new conditionality on rule of law. European Commission President von der Leyen said after the first day of November’s EU Summit: “The President of the Council already said that there was a brief exchange on MFF Next Generation EU and the conditionality mechanism.

“We had found an agreement in July at 27. It consists of the three components, to meet the needs and expectations of European citizens we need the whole package.

“It has been agreed between the Council and the European Parliament, now it is important that we move forward.

“The Commission supports the agreement found in the trialogue between Council and Parliament. And for me, it is equally important for the future of the union to have a budget and to uphold the rule of law.”

She continued: “We’re now working with the rotating presidency who’s leading the efforts to find a solution.

JUST IN: Michel Barnier hatches plan to get Brexit deal past Macron amid fears of EU power grab 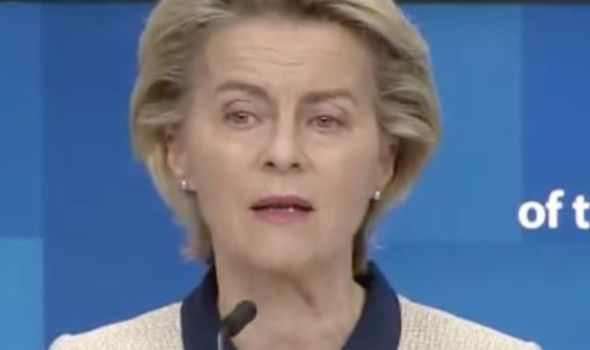 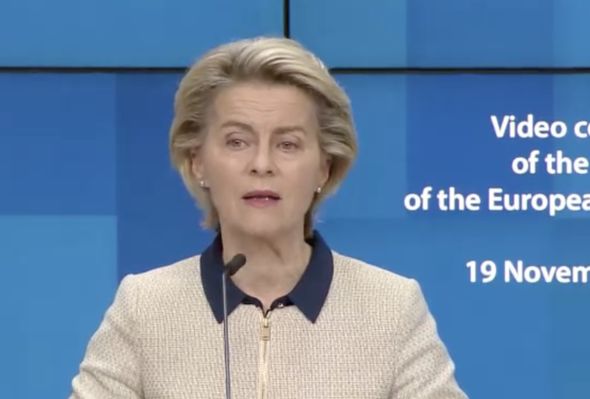 “We all know that millions of European businesses and citizens are waiting for the answer in the midst of this unprecedented crisis.

“The strength of our union has always been to overcome difficult situations by engaging with each other so we continue to work hard to reach an agreement soon.”

European Council Charles Michel said a majority of European Member states had agreed to back the extraordinary £1.6 billion MFF but a minority of member states had expressed serious opposition to the conditionality mechanism.

Representatives for Budapest and Warsaw threw a spanner in the adoption mechanism as they blocked the “own resources” legislation which would regulate the type of revenue the EU can raise by itself.

The Commission has maintained the own resources step is absolutely necessary to secure both the MFF and the coronavirus rescue fund.

Hungary and Poland however expressed “some reservations” because of the rule of law conditionality – the latest in a series of moves aimed at pushing the two member states into aligning to the value system of the rest of the bloc.

After the withdrawal of the two countries from the negotiations, a senior EU diplomat warned failure to come to an agreement could plunge the bloc into yet another “crisis.”

The said: “We will be likely in crisis again. I cannot tell you exactly when all this will be up and running, certainly, there will be delays.”