The Justice Department also said it was changing its policy to bar seizing reporters’ phone and email records in hunts for their sources. 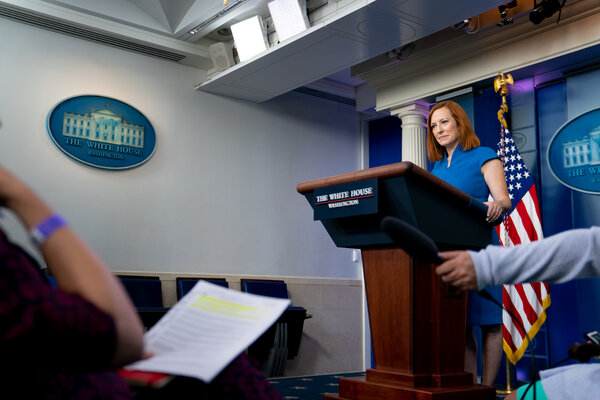 By Charlie Savage and Katie Benner

WASHINGTON — The Biden administration said on Saturday that no one at the White House had been aware that the Justice Department was seeking to seize the email data of four New York Times reporters and had obtained a gag order in March barring a handful of newspaper executives who knew about the fight from discussing it.

The disavowal came one day after a court lifted the gag order, which permitted a Times lawyer to disclose the department’s effort to obtain email logs from Google, which operates the Times’s email system. It had begun in the last days of the Trump administration and continued until Wednesday, when the Biden Justice Department asked a judge to quash the matter without having obtained the data about who had been in contact with the reporters.

“As appropriate given the independence of the Justice Department in specific criminal cases, no one at the White House was aware of the gag order until Friday night,” Jen Psaki, a White House spokeswoman, said in a statement.

The administration also announced that the Justice Department was formally changing its leak investigation policy to ban seizures of reporters’ phone and email records in an effort to uncover their sources.

President Biden had declared last month that he would not let prosecutors go after reporters’ communications data, after disclosures that the Trump Justice Department had secretly seized phone data of Washington Post reporters and phone and email data of a CNN reporter.

“It’s simply, simply wrong,” Mr. Biden said. “I will not let that happen.”

But Mr. Biden’s comment — which came before the Justice Department notified the same four Times reporters this week that it had secretly seized their phone records in 2020 — was seemingly off the cuff, and contradicted existing department regulations that dated back to the Obama administration.

Those regulations permitted going after such data in leak investigations so long as there was high-level approval for the tactic. The Justice Department had refused to comment on whether it was formally changing its policy in light of Mr. Biden’s remarks, but on Saturday, Anthony Coley, a department spokesman, said that it had now done so.

“Going forward, consistent with the president’s direction, this Department of Justice — in a change to its longstanding practice — will not seek compulsory legal process in leak investigations to obtain source information from members of the news media doing their jobs,” Mr. Coley said in a statement.

He added, “The department strongly values a free press, protecting First Amendment values and is committed to taking all appropriate steps to ensure the independence of journalists.”

“While the White House does not intervene in criminal investigations, the issuing of subpoenas for the records of reporters in leak investigations is not consistent with the president’s policy direction to the department, and the Department of Justice has reconfirmed it will not be used moving forward,” she said.