Joe Biden has cut into President Trump’s edge among suburbanites and older voters, but his support from Latino voters appears weaker than Hillary Clinton’s was. 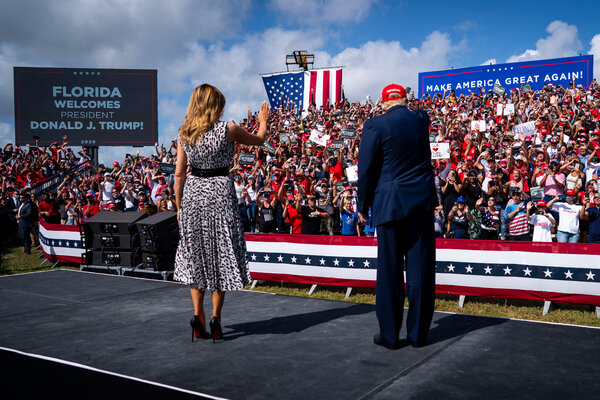 Welcome to Poll Watch, our weekly look at polling data and survey research on the candidates, voters and issues shaping the 2020 election.

The presidential race in Florida looks similar to 2016 in at least one regard: It’ll probably be close, maybe decided again by just a single percentage point. But under the surface, there will be major differences in terms of who’s voting for whom.

President Trump can count on the continued support of rural voters and white men, while Joseph R. Biden Jr. is almost guaranteed to carry strong support from women and African-American voters across the state.

Yet Mr. Biden is unlikely to hold on to Hillary Clinton’s strong showing with Latino voters. Instead, he’s looking to make up for it among some of the white voting blocs that Mr. Trump relied on in 2016, particularly suburbanites and older voters.

A batch of high-quality Florida polls arrived this week — probably some of the last that we’ll see before the election — and they all showed Mr. Biden with an advantage of three to six percentage points among the state’s likely voters. Taken together, the surveys from Monmouth University, Quinnipiac University and NPR/PBS NewsHour/Marist College put Mr. Biden in a strong position to pull together a winning coalition in Florida, which has successfully predicted the victor in the past six presidential elections.

In each poll, the difference was within the margin of error, and the polling miss of 2016 — when Florida surveys overestimated Mrs. Clinton’s support by a few points — should give us pause.

But Mr. Trump’s victory in Florida that year relied heavily on late-deciding voters, and in both the Monmouth and Marist polls, no more than 2 percent of voters said they still didn’t know how they would vote. Turnout is also on track to be considerably higher this year, which leaves less room for certain groups to under-participate, as Democratic voters did in 2016, further throwing off polls.

The consistency of the findings from this week’s polls suggests that Mr. Trump does have ground to make up. The Monmouth and Quinnipiac polls also showed that he will be fighting the clock: In both surveys, just 17 percent of likely voters said they would vote on Election Day, with the rest planning to cast ballots early in person or by mail.

Turnout has been running high across the state, with more than seven million ballots already cast as of Thursday night. That’s nearly 80 percent of the total votes cast in 2016. After one more weekend of early voting and a few more days of mail ballots arriving, the vote tally could well surpass 2016’s total vote before Election Day even arrives.