Even some people in Gastonia, N.C., are a little perplexed about why the president was holding a rally in a small community that’s already in his camp. 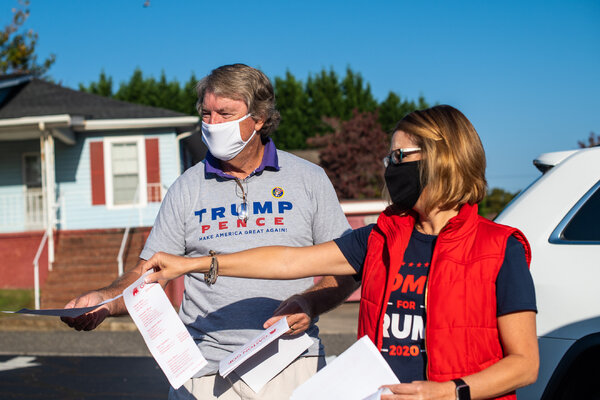 GASTONIA, N.C. — Republicans in Gaston County still have pictures from the last time a presidential candidate visited here during a general election: They are sun-stained images from 1992, when President George H.W. Bush’s Spirit of America train tour made a stop in the town of Ranlo.

When residents heard that President Trump was planning a rally in Gastonia, they reacted with a mix of small-town pride and general confusion. He won the county in 2016 with 64 percent of the vote; have things gotten so bad for Mr. Trump in the suburbs of America that he needed to spend time here two weeks before Election Day?

“What I’m seeing in my online communities is that people immediately laughed,” said Courtney Phillips, a stay-at-home mother who has been involved in grass-roots organizing for the Biden-Harris campaign. “Why is he coming here? Is he really worried about Gaston County?” Tens of thousands of people ultimately turned out for Wednesday night’s rally, indicating that this red county, at least, had an energized Trump base. “People had to park at the mall,” she said.

In this final sprint of the campaign, Mr. Trump is now holding up to three rallies a day to try to “juice” his base, in the words of advisers, as he bleeds support among the suburban voters who helped fuel his victory in 2016. His trip to this bedrock Trump county, and to Wisconsin and Ohio suburbs and exurbs on Saturday where his once-solid support is sliding, reflect his need to energize as much of his base as he can since many swing voters are now behind former Vice President Joseph R. Biden Jr. and there are few undecided voters left.

Gastonia is only about a half-hour west of downtown Charlotte, but once you cross the county line at the Catawba River, you are in die-hard Trump country. The only Democrat elected countywide here is the sheriff, who shares the president’s positions on guns and immigration. Trump flags fly in front of many houses, and lawn signs with his name dot the highways. “He isn’t a perfect president, but I am more proud of him now than I ever was before,” said Sandy Caudle, who works for a wholesale distributor and had two Trump banners displayed with his Halloween decorations on his front porch in the town of Lowell.

Four years ago, Mr. Trump’s outsized win in this district helped him toward an overall victory in North Carolina by a slim margin of 3.6 percentage points. A New York Times/Siena College poll this month of likely voters in the state showed Mr. Biden leading Mr. Trump by four points.

Lawn signs and campaign posters for Mr. Biden in this area are rare sightings. People like Karen Brown, who had a modest Biden-Harris sign displayed on her front yard in Gastonia, said she could not find one anywhere in town and finally resorted to ordering the $10 sign from Amazon.

Mr. Trump’s appearance in this town of 77,000 on Wednesday night — where he referred to President Barack Obama by his middle name, “Hussein,” and claimed, inaccurately, that the virus was “rounding the corner” — was not intended to win back the suburban women voters who have drifted away from him over the past four years. That is a hill too steep to climb at this point, in this state: Some internal polls show Mr. Trump trailing Mr. Biden by double digits in the suburbs. The rally’s purpose, campaign aides said, was to activate his base. There was the added practical matter of simply securing a friendly venue in the middle of a pandemic that would allow him to hold a mass gathering for more than 20,000 fans. 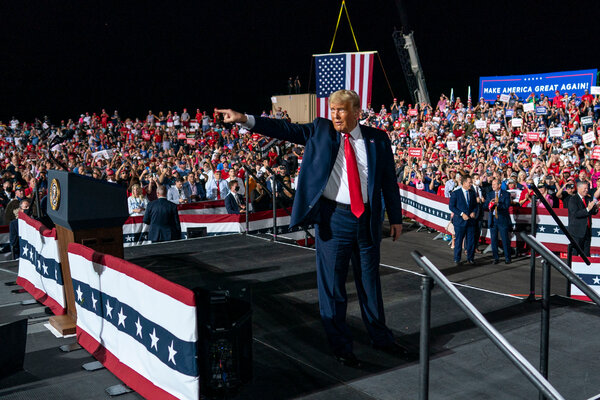 “They don’t go to Raleigh or Charlotte,” said Morgan Jackson, a Democratic strategist based in North Carolina. “They’re going to Gastonia and Selma and Greenville. They’re playing the outer game to rally his base. They’ve given up on the Mecklenburg County suburban area. I think they’ve given up here on those votes.”

The Trump campaign’s decision to send the candidate to a conservative county he is sure to win may not be a sign of strength. But it is probably his best shot at rallying enough voters to prevail in North Carolina, where Mr. Trump’s most optimistic campaign officials think he will eke out a victory margin of less than 100,000 votes (four years ago, Mr. Trump won the state by about 173,000 votes).