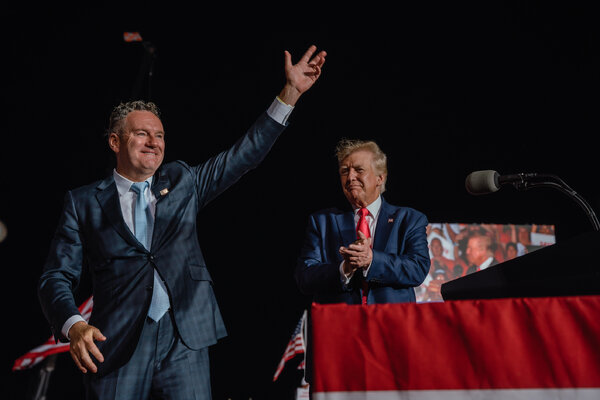 Republican primary voters upended their party’s establishment in Wisconsin on Tuesday, choosing a Trump-backed candidate for governor who has entertained overturning the 2020 election results to take on Gov. Tony Evers, a Democrat, in one of the country’s most consequential November contests.

And Mr. Trump’s followers gave a serious scare to the powerful Republican speaker of the State Assembly, Robin Vos. In recent weeks, Mr. Vos had become the former president’s chief antagonist among Wisconsin Republicans because he refused to indulge Mr. Trump’s false claims that the 2020 results can still be decertified.

Mr. Vos inched past a far-right challenger and political neophyte who was desperately short on money but was buoyed by a Trump endorsement just a week before the primary.

Mr. Michels won by predicating his entire campaign on his support from Mr. Trump, highlighting that distinction in nearly all of his millions of dollars of self-funded television advertising and reminding voters about it during campaign stops and debates.

“I’d like to thank President Trump for his support, for his endorsement,” Mr. Michels said in victory remarks at his campaign headquarters in Waukesha, Wis. “It was a tremendous validation of our meteoric rise in this campaign. He knows that we need new leadership and he sees a lot of similarities.”

During the primary, Mr. Michels, 60, subscribed to some of Mr. Trump’s most outlandish conspiracy theories about the 2020 election. He pledged to consider signing legislation that would overturn Mr. Trump’s defeat to Joseph R. Biden Jr. in Wisconsin and withdraw the state’s 10 electoral votes — a move that has no basis in state or federal law.

But on Tuesday night, Mr. Michels did not mention the 2020 election or the state’s voting laws — an issue that just last week he said he was “very, very fired up about.”

Mr. Michels has projected a tough-on-crime stance, pledging to fire the Democratic district attorney in Milwaukee, hire more police officers and increase prison sentences for gun-related crimes. He also opposes abortion, which is now illegal in Wisconsin under an 1849 law and is likely to remain that way under the Republican-controlled Legislature.

Now Mr. Michels will take on Mr. Evers, who has cast himself as a defender of fair elections and has vetoed more than a dozen bills passed by Legislature that would have restricted voting.

More Coverage of the 2022 Midterm Elections

Mr. Michels has proposed replacing the bipartisan Wisconsin Elections Commission with a body made up of one member from each of the state’s gerrymandered congressional districts — a way for Republicans to maintain control of the state’s election apparatus for at least the next decade.

Mr. Evers has shattered fund-raising records in Wisconsin, raising more than $10 million through July despite worries among Democrats that he does not generate enough excitement among the party’s base. Mr. Michels has spent more than $8 million of his own money since joining the race in April, and he is likely to invest even more in the general election.

While Mr. Michels prevailed, Mr. Trump ultimately failed to displace Mr. Vos, who has been in the Legislature since 2005 and served as speaker since 2013, wielding more influence than any other Republican in the state in recent years.

The race was far closer than Wisconsin analysts had expected, with Mr. Steen appearing to come within several hundred votes of toppling Mr. Vos, a testament to the power of the Trump endorsement and the enduring false belief that the 2020 election can still be rolled back.

Over the last year, Mr. Vos tried entertaining Mr. Trump’s wildest conspiracy theories about the 2020 election without completely giving in to the lies. When the former president demanded last summer that the state review its election results, Mr. Vos instead appointed a former Wisconsin Supreme Court justice, Michael Gableman, to pursue a state-funded investigation of his own.