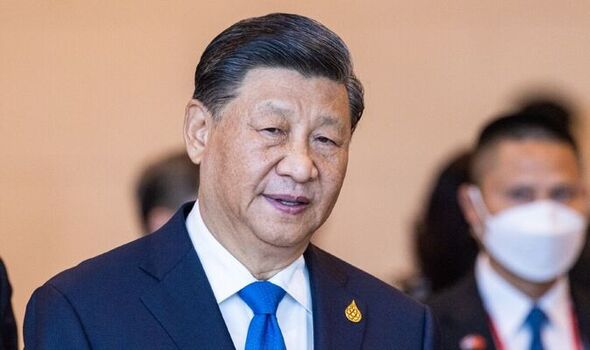 The UK has been urged to prepare for a “clash” with China, as Tory MP Tobias Ellwood has warned Xi Jinping is expanding the country’s “colossal” army. Mr Ellwood, Chair of the Defence Select Committee, described Beijing as a “sleeping dragon”. He said the country is becoming “more aggressive and more assertive”, urging Prime Minister Rishi Sunak to “prepare for what’s coming over the hill”.

According to a Pentagon report, China is on course to expand its nuclear arsenal to 1,500 warheads by the middle of the next decade.

The report estimates that China is currently in possession of 400 warheads.

Mr Ellwood told Sky News that there are “lessons to be learnt from Ukraine”, explaining: “We didn’t do enough there to prevent the economic and security consequences.

“China is now getting more aggressive and more assertive and if President Xi fulfils his promise, the impact would be huge.

“It would not just be an ideological win over democracy, but china would get a major economic powerhouse. Here in [Taiwan], they make the advanced semi-conductors that are used throughout the world.

“It would also allow China to dominate the south china sea, those important shipping lanes and would give China momentum to further pursue its authoritarian agenda.”

He added: “Of course, how would the west look after that? They’re losing another democratic partner. It’s so important to understand what’s going on here and prepare for what’s coming over the hill.”

Mr Ellwood continued: “Sleeping dragon is a great way to describe this. It’s not just its nuclear arsenal it’s developing. Its army, its navy and its arsenal are now one of the largest in the world.

“They are colossal and it’s not just the South China Sea that they’re dominating – they’re starting to move their assets and put their bases around the world.

“It’s essentially competing with the western way of life and it’s going to lead eventually to a clash.

“We’ve been asleep for the last two or three decades, seeing China advance but not actually confirming what we believe in by allowing them to trade on their own terms and allowing them to advance”.’