The California megachurch pastor Greg Laurie is the latest prominent attendee at the Sept. 26 Supreme Court nomination ceremony at the White House to test positive for the coronavirus. He announced the test results Monday and said he was in isolation.

“If the president of the United States can get it, obviously anybody can get it,” Mr. Laurie said in a video posted on social media. In an interview with Christianity Today, Mr. Laurie said he was not sure he was infected at the Rose Garden event, and urged Americans not to blame the White House for his infection.

“Unfortunately, the coronavirus has become very politicized,” he said. “I wish we could all set aside our partisan ideas and pull together to do everything we can to defeat this virus and bring our nation back.”

Mr. Laurie was one of many high-profile Christian leaders who attended the ceremony. Another — the Rev. John I. Jenkins, the president of the University of Notre Dame —  announced on Friday that he tested positive.

Several of the attendees have since preached in person at church services or have been photographed at other public events, suggesting that they are not following C.D.C. recommendations for quarantine after their exposure in the Rose Garden.

Jerry Prevo, the acting president of Liberty University, announced on Friday that he and his wife had both tested negative. He posted photographs the next day in which he and his wife are seen mingling closely indoors with people not wearing masks.

A representative for Robert Morris, a Dallas-area megachurch pastor who preached in person last weekend, said on Monday that he “does not have any Covid-related symptoms,” but he declined to say whether he had been tested.

Another Dallas-area pastor, Jack Graham, also preached in person at his church on Sunday morning. “I am ridiculously healthy,” he told his congregation, who responded with applause. “I don’t have Covid, let’s just put it that way.” A spokeswoman for Mr. Graham said that he has been tested twice since the Rose Garden event and that both tests have been negative. The spokeswoman said he has consulted with his personal physician about his activities since the event, but declined to offer information on the timing of his tests.

Mr. Graham said during the service that he flew to Atlanta last Wednesday to meet with Vice President Mike Pence, who spoke at an indoor event hosted by the Faith and Freedom Coalition that was attended by some of the same evangelical leaders. A spokeswoman for the group’s head, Ralph Reed, said he tested negative on Wednesday before the vice president’s arrival. The spokeswoman said seating at the event was arranged in consultation with local health officials, and that attendees were encouraged to wear masks. 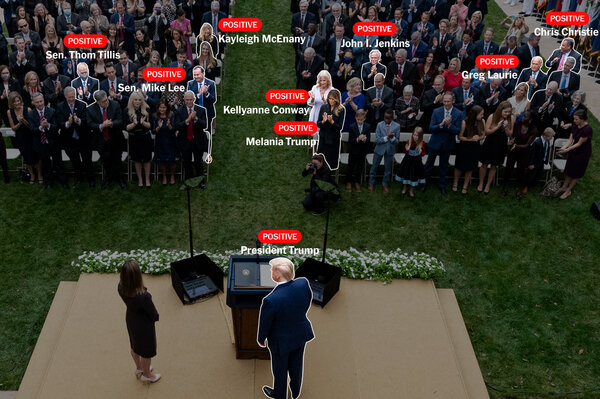 Inside the White House Event Now Under Covid-19 Scrutiny

Multiple attendees of a Sept. 26 celebration for Judge Amy Coney Barrett have since tested positive for the virus.