The UK’s evacuation mission at Kabul’s airport has “a matter of hours” left and no more people will be called forward, Defence Secretary Ben Wallace has said.

Mr Wallace told Sky News the effort was into its “final hours” after the closure of the main processing centre in Kabul at the Baron Hotel near the airport.

He said: “We at 4.30 this morning, UK-time, closed the Baron Hotel, shut the processing centre and the gates were closed at Abbey Gate.

“We will process the people that we’ve brought with us, the 1,000 people approximately in the airfield now and we will seek a way to continue to find a few people in the crowds where we can, but overall the main processing is now closed and we have a matter of hours.

“The sad fact is not every single one will get out.

“The threat is obviously going to grow the closer we get to leaving.” 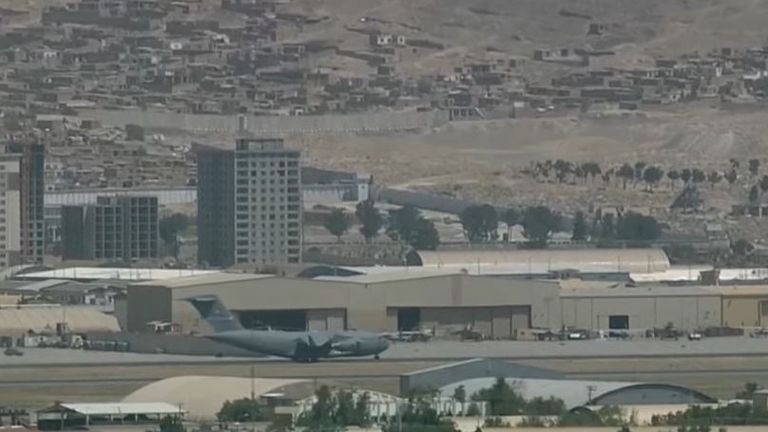 The Baron Hotel was closed just hours after an attack, claimed by terror group ISIS-K, outside the airport killed 13 US troops and 72 Afghans.

Mr Wallace said he had authorised the loosening of regulations on numbers “to pack people in” on the final flights out. It is expected about 600 people will now be able to board military transporters.

He also revealed the UK closed the processing centre at the Baron Hotel “almost on time – we were always going to close it then”.

The defence secretary said the night before the attack the British Army had pushed a perimeter away from the Barons Hotel by about 300 metres.

“If they hadn’t pushed that perimeter further out we’d be in a worse place,” he added.

Defence sources told Sky News up to half of those crowding into the Baron Hotel yesterday for processing were not cleared under the Afghanistan Relocations and Assistance Policy (ARAP) for interpreters or the Leave Outside the Immigration Rules (LOTR) scheme, making processing difficult.

The roughly 1,000 UK troops at the airport will start packing up and leaving after the final evacuations have taken place today, the defence secretary said.

He would not confirm whether they would remain in Kabul until the 31 August deadline the US has set.

People who were unable to get processed should make their way to land borders and the UK will make sure its visa processing facilities in neighbouring countries are working hard to get Afghans to the UK, Mr Wallace said.

After the US warned of an imminent terror attack on Wednesday, most countries ended their evacuation efforts on Thursday ahead of the bombing.