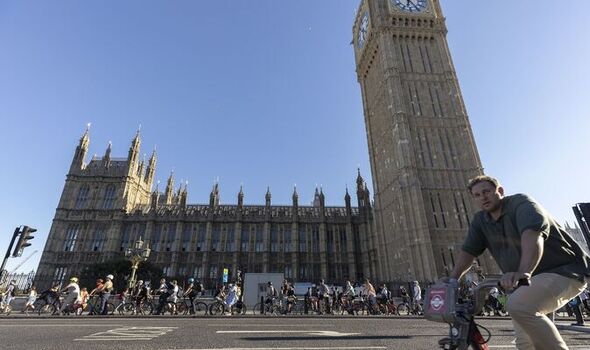 As expectations grew that an official drought will be declared tomorrow, Met Office boss Paul Davies said he feared 95F (35C) heatwaves – like the one baking Britain this week – could start to happen once every five years. He said they could even become an annual event by the end of the century. And temperatures of 104.5F (40.3C), like those recorded in Britain last month, could also start to be seen every seven years.

Talking about the changes to our climate and the “brutal” record-breaking high experienced in Lincolnshire on July 19, Mr Davies said: “I knew it was possible but to see it unfold in reality is quite scary.

“When I started as a forecaster, if someone had said, ‘In your lifetime you’ll see 40 degrees’, I’d have said; ‘No, surely not!’

“We are in uncharted waters. We’re entering areas we’ve never experienced before and it’s not just the UK, it’s the planet as a whole.”

The highest temperature yesterday was recorded in Wiggonholt, West Sussex, at 31.8C (89.2F).

Today there is a Met Office amber “extreme heat” warning in place that will last until Sunday.

Tomorrow, when temperatures are set to hit 91F (33C), the National Drought Group – consisting of water firms, government representatives and charities – will meet . According to the Environment Agency, an official drought means water companies should impose restrictions on both non-essential domestic and commercial water use.

Most have so far avoided hosepipe bans but a lack of rainfall and a heatwave this week could force them to introduce the measures.

Environment Secretary George Eustice yesterday met water company bosses to discuss their response to the prolonged dry weather – and what they are doing to safeguard supplies.

He said: “I met the chief executives to discuss the measures they are taking…in what is the driest summer in over 50 years. All water companies have reassured me that water supplies remain resilient across the country. Each company has a pre-agreed drought plan which they are following.

“I have urged them to take any precautionary steps needed to protect essential supplies as we go into a likely very dry autumn.

“We are better prepared than ever before for periods of dry weather with a system that is working well to manage water usage, protect the environment and maintain water supplies for the public and critical sectors.

“We will continue to actively monitor the situation.”

Reservoirs across Britain were looking depleted yesterday. There was not a drop to be seen at The Elan Valley, in mid Wales which looked more like a rocky desert.

Meanwhile, the hot weather has seen an explosion in pea soup algae in London, turning the water in the capital’s canals bright green. Paddle boarders try to clear it daily.

Millions more people will face a hosepipe ban in the coming weeks.

Thames Water, which has 15 million customers across London and the Thames Valley, became the latest to signal it will bring in restrictions.

The company this week had to supply bottled water to villagers in Northend, Oxon, after supplies were disrupted due to a “technical issue”.

And as the hot, dry summer continues, Mr Davies had a message for climate change deniers.

He said: “Look at the evidence. All the scientists of this planet, all agreeing, that it is happening. You’re seeing the evidence. That was a wake-up call for people, experiencing those temperatures.”

Temperatures could hit 36C on Saturday. But there is some hope of rain on Monday and Tuesday in the parched South and Midlands.