The jury at the High Court in Edinburgh found Scotland’s former first minister not guilty on 12 charges. 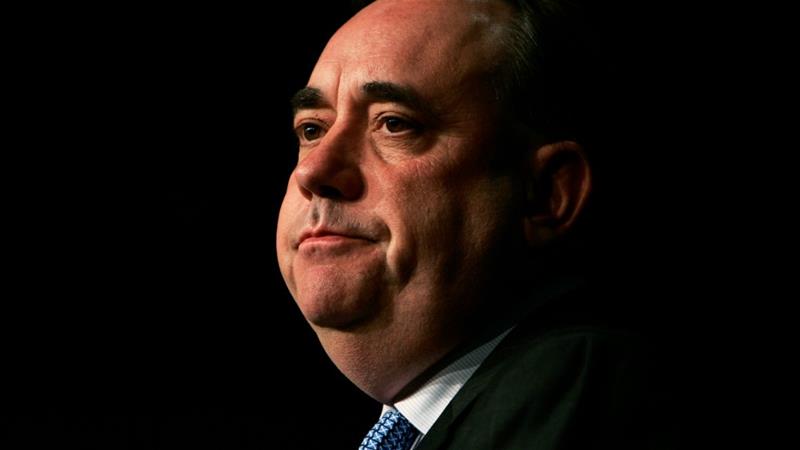 Glasgow, Scotland – Alex Salmond, who took Scotland to the brink of independence in 2014, has been cleared of all charges following attempted rape and sexual assault allegations.

The jury at the High Court in Edinburgh on Monday found Scotland’s former first minister not guilty on 12 charges, with one charge of sexual assault with intent to rape not proven – a verdict unique to Scots law.

Speaking outside court after his acquittal, Salmond told reporters: “As many of you will know, there is certain evidence I would have liked to have seen led in this trial but for a variety of reasons we were not able to do so. At some point, that information, that facts and that evidence will see the light of day.”

The two-week trial in the Scottish capital had been one of the most hotly anticipated court cases, but was obscured by the coronavirus pandemic.

At any other time, the trial of a man who was once leader of the pro-independence Scottish National Party (SNP) and head of Scotland’s government, would have made headline news.

Scottish political commentator Gerry Hassan told Al Jazeera: “Apart from the sensational first and second day of the Salmond trial, it was relegated to also-ran comments in the mainstream media.

“Because of the coronavirus and because there are huge issues of humanity, of life and death at stake, it does mean that the political dimension of this and the deep divisions of the SNP are going to take a bit more time to come to full fruition. But they will.”

After the verdict was announced, SNP Member of Parliament Kenny MacAskill tweeted: “Delighted for Alex Salmond. Some resignations now required.”

SNP Member of Parliament Joanna Cherry also welcomed the jury’s decision – but said “serious questions now arise about the background to these cases.”

Such remarks appear to relate to how the Scottish government, currently under the guidance of SNP leader and Scottish first minister Nicola Sturgeon, a one-time protege and friend of Salmond, handled complaints against the ex-first minister.

Salmond successfully sued his former administration in Edinburgh last year, following its flawed inquiry into sexual harassment claims against him, and he was awarded costs of more than 500,000 pounds ($576,480).

“This has created a bit of a split in the party, and the Salmond supporters will feel vindicated,” said Simon Pia, a former Scottish Labour Party press adviser, speaking to Al Jazeera.

“Who would not say that Salmond might once again aspire to leadership?”

But outside the political arena, reactions to Salmond’s acquittal were also notable.

“This will be a very difficult day for many, many survivors of sexual violence and it’s really important that anyone affected by this knows that we believe them – and that support is there,” she said.