AMSTERDAM (Reuters) – Amsterdam’s mayor faced criticism from politicians and health experts on Tuesday after thousands of demonstrators packed the city centre for an anti-racism rally in violation of social distancing rules put in place to ward off the coronavirus. 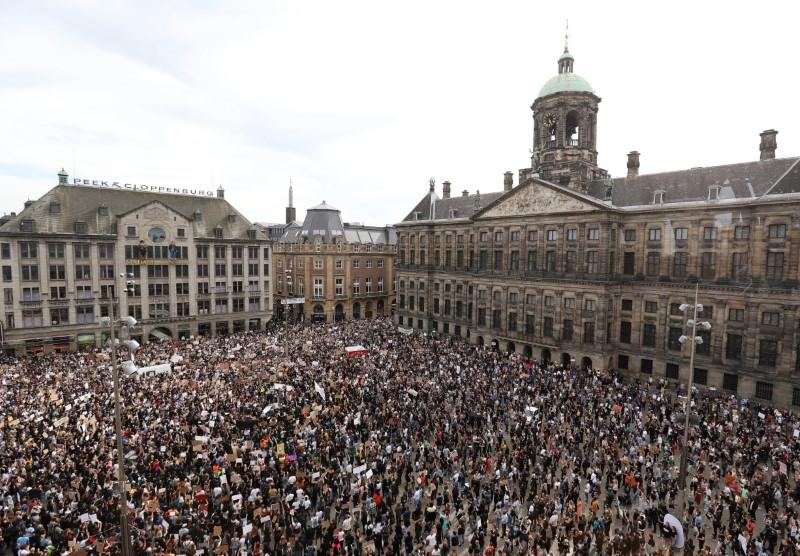 The protesters rallied in support of George Floyd, a black American who died in police custody in the United States last week, their number swelling from an expected 200-300 to several thousands on Monday.

Amsterdam Mayor Femke Halsema, of the Green Left party, said city authorities were caught off guard by the huge turnout and could not have intervened peacefully. She defended the public’s right to demonstrate.

“I had seen how these gatherings grew into massive events in Berlin and London and U.S. cities,” she told Dutch public television broadcaster NPO Monday night, but there had been “absolutely no indication it would be this big”.

The Netherlands has recorded nearly 6,000 deaths from COVID-19. Authorities have issued fines of around $400 for violating rules not to hold public gatherings, but there were almost no police at Monday’s event.

The demonstration, the largest in the Netherlands since lockdown measures were imposed in mid-March, sparked debate about whether the event could cause new infections.

“This is exactly what we don’t want,” Menno de Jong, a virologist at Amsterdam’s UMC hospital and a member of the Dutch national coronavirus crisis team, told the Parool newspaper.

“You don’t need to be a virologist to reach this conclusion. There is a reason we have been talking about social distancing for months. This could potentially be a so-called super spreading event.”

Klaas Dijkhof, a member of parliament for the VVD party of Dutch Prime Minister Mark Rutte, said on Twitter he was “not only angry, but worried by the images out of Amsterdam”. He called on demonstrators to voluntarily isolate themselves for two weeks.

Video footage of a white police officer in Minneapolis kneeling on the neck of Floyd, 46, for nearly nine minutes last Monday before he died, has led to global protests.