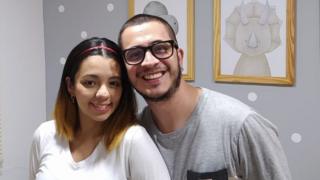 When the letter arrived at Daniel Guzmán’s doorstep, it provided him with a glimmer of hope during one of the hardest moments of his life.

“Keep going, when this is all over, you will walk out of the house with your head held high and your heart willing to give the best of you,” it read. It was signed simply “Niña Peregrina” (Spanish for “Wandering Girl”)

Niña Peregrina’s was one one of hundreds of letters that have been exchanged by complete strangers in the Colombian city of Medellín during the country’s months-long quarantine.

The anonymous letter exchange is part of a project by a network of libraries in the city.

The novel by Colombia’s Nobel Prize winner tells the story of a couple who fall in love in their youth but who are forced to stop courting when the girl’s father finds out about their secret relationship. For the next five decades they exchange love letters using pseudonyms.

When the libraries in Medellín closed as part of the measures brought in to curb the spread of coronavirus, Bibiana Álvarez decided to play with the idea that García Márquez had laid out decades before.

She and other community leaders put out a call for residents to send in anonymous letters of friendship, love or support.

Whenever the team receives a letter, they decorate it and then send it on to someone who has also sent in a missive. The recipient is chosen at random and neither recipient nor writer are told each other’s identity.

Ms Álvarez says the idea is to show both writers and recipients that “words have a lot of power” and that they can convey a sense of togetherness.

“Writing has been incredibly powerful, [it acts] as a sort of catharsis, they can burn off steam, and they feel that they’re not alone,” she says. She says that even with the distance imposed by the lockdown, the letters make it possible for people “to know that others feel the same way they do”.

Ms Álvarez did not know whether the idea would take off, but hundreds of letters soon flooded in.

Among them was one from 30-year-old Daniel. His wife was four-months pregnant when the first cases of coronavirus were being reported Colombia in March.

Despite three months of lockdown, the number of cases has continued to rise steadily and now stands at more than 95,000.

Worry became their new normal. “There are so many things that go through your head,” Daniel says of the couple’s concerns. “It’s been really terrifying for my wife and it’s been very difficult for us to think about when she gives birth.”

Tales of kings and knights

He had been reading a book about knights and kings when he saw the call for letters and decided to write his missives in the voice of a fictional character he named Cardinal Cervantes de Guzmán.

“I miss your eyes, blue as the sky, during these grey days of confinement. I still have in my memory that wonderful sound of you laughing out loud, I can’t forget your aroma… that mixture of the city in chaos with beautiful lavender landscapes. I want to see you again, even if I’m not sure when that reunion will be,” he wrote, signing the letter “eternally yours, Cardinal Cervantes de Guzmán”.

Daniel describes his character as someone who is dreaming of old memories and longing for a love he was separated from.

While some take the opportunity to compose poems or pen fictional tales like Daniel, others like Niña Peregrina use the space to write words of encouragement.

Daniel, the recipient of Niña Peregrina’s missive, thinks that “these letters arrive in the moments you need them the most”.

Bibiana Álvarez says providing comfort in a time of crisis was just one of the project’s goals. The other was to preserve the stark realities of the moment in people’s own words.

Public libraries have played an important role in Medellín’s history.

In the 1980s and 1990s the city was at the heart of a violent drug war playing out across Colombia. Murder rates were through the roof but that started to change as the city began to invest in public projects in the city’s most dangerous areas.

A metro system offered a safe mode of transport and libraries became safe spaces for communities accustomed to living under constant threat.

“It’s the libraries that have been on the ground when other institutions have closed in times of violence,” Ms Álvarez explains.

“In moments of crisis, in moments of uncertainty, they’ve been there for their communities.”

Now, with the Americas the new epicentre of the coronavirus, she says they hope to continue fulfilling that same role even as they have to find innovative ways to connect with people.

She is especially keen to reach families in poorer areas.

Before the lockdown, staff would go to rural zones outside Medellín to lend books and read to families without access to a library.

The project, called “Palabras Viajeras” (Spanish for Travelling Words) has gone digital. For those who do not have access to the internet, staff are sending videos of themselves reading over the popular messaging platform, WhatsApp, or calling the families directly and reading to them out loud.

“I don’t know if we can see a light at the end of the tunnel yet but we have hope that things are going to be okay,” she says.