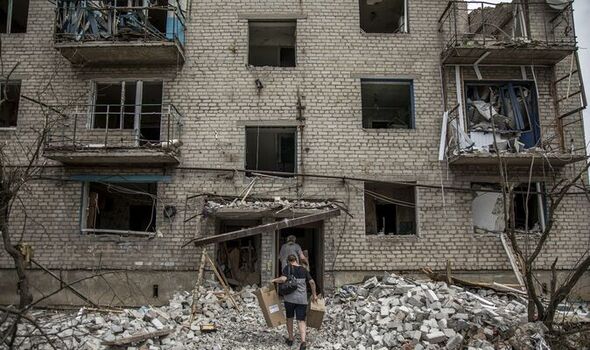 Vladimir Putin’s forces struck the five-storey building, completely ripping apart one side at Chasiv Yar in eastern Ukraine on Saturday night. Dozens of emergency workers yesterday searched tirelessly for bodies under the mountain of concrete.

They paused only briefly to listen for any sign of survivors, with indications that three people were alive.

Witnesses told how they saw “lightning” as the Uragan rockets obliterated the apartments.

Andriy Yermak, chief of staff to President Volodymyr Zelensky, called the strike “another attack” that Russia should be held accountable for as an act of terrorism.

Chasiv Yar is city 12 miles south east of Kramatorsk, a location expected to be a major target for Moscow forces as they move west.

Survivor Ludmila, speaking as rescuers removed a body in a white sheet, said: “There were three hits, the first somewhere in the kitchen.

“The second strike I do not even remember. There was lightning, we ran towards the second entrance and then straight into the basement. We sat there all night.”

Russia claimed its missiles had destroyed a hangar storing US M777 howitzers.Veronika Bakhal, from the Donetsk emergency services, said at least 20 people were believed to still be under the rubble, including a child.

She said: “Contact with three persons has been established and is being maintained. We know for sure there are people alive. Measures are now being taken to save them.”

Ms Bakhal added the civilian death toll in this latest atrocity is one of the highest in Donetsk. Meanwhile, Ukraine was reinforcing defences at Kramatorsk and Slovyansk while its troops fired missiles at Russianoccupied Kherson.

Officials have warned residents there and in Zaporizhzhia to evacuate as it prepares to launch a counteroffensive to retake the regions.

These has been quickly occupied by Putin’s troops in February after they had crossed from Russiaannexed Crimea. Yuriy Sobolevskyi, deputy chairman of the Kherson regional council, said of the order for civilians to flee: “It must be done.”

The first Ukrainian soldiers have started a training programme in the UK, with up to 10,000 scheduled to take part at Ministry of Defence sites in the next four months.