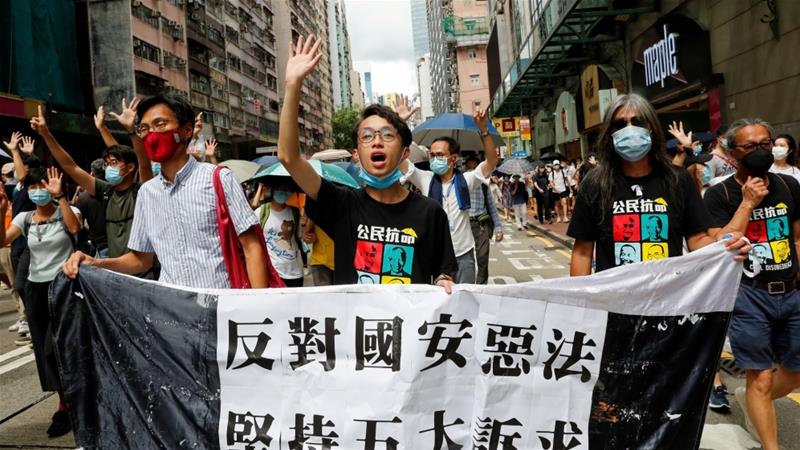 Morrison’s announcement on Thursday came as lawmakers in the United States agreed to seek sanctions on groups that undermine the wide-ranging autonomy and freedoms Hong Kong was promised when Britain returned the city to China in 1997.

Morrison said the situation in Hong Kong was “very concerning” and his government was “very actively” considering proposals to welcome in residents of the former British territory.

Asked by a reporter whether Australia could extend an offer of safe haven, Morrison responded “yes.”

He said his cabinet would soon consider options “to provide similar opportunities” to Hong Kong people as those offered by Britain, which on Wednesday said it was prepared to offer extended visa rights and a pathway to citizenship for almost three million of the city’s residents.

“When we have made a final decision on those arrangements, then I’ll make the announcements,” he said. “But if you are asking: are we prepared to step up and provide support? The answer is: Yes.”

Australia could potentially offer Hong Kong residents temporary protection visas that allow refugees to live in the country for up to three years.

China bypassed Hong Kong’s Legislative Council to pass the sweeping legislation without public consultation. The law punishes secession, subversion, terrorism and collusion with foreign forces with up to life in prison and comes in response to months of mass pro-democracy protests last year that at times descended into violence.

Critics fear the law could undermine the city’s autonomy, civil liberties and judicial independence, but Beijing dismisses the charge, saying the legislation will only target a handful of “trouble-makers”.

In Washington, DC, the US House of Representatives joined the country’s Senate in approving a bill that imposes sanctions on police units that have cracked down on Hong Kong protesters, as well as Chinese Communist Party officials responsible for imposing the new security law.

The draft law also would impose sanctions on banks that do business with entities found to violate the law.

House Speaker Nancy Pelosi called the unanimous House vote “an urgently needed response to the cowardly Chinese government’s passage of its so-called ‘national security’ law, which threatens the end of the ‘one country, two systems’ promised exactly 23 years ago today”.

Pelosi, a fierce critic of Chinese human rights violations, said, “All freedom-loving people must condemn this horrific law” imposed by China, adding that it is specifically intended to “dismantle democratic freedoms in Hong Kong”.

Due to technical changes, the Senate will need to vote again. Senator Chris Van Hollen, who co-sponsored the bipartisan bill, said the chamber will vote as soon as Thursday to give final legislative approval, sending it to the White House.

US President Donald Trump’s administration has already taken a series of actions in response to China’s moves on Hong Kong, including restricting visas to an unspecified number of officials and blocking high-tech exports to the financial hub.

Meanwhile, in Japan, Chief Cabinet Secretary Yoshihide Suga said Tokyo was watching the events in Hong Kong with “great interest” adding that his country’s close business ties with Hong Kong were based on the city’s “one country, two systems” governance.

China has previously denounced criticism over its Hong Kong moves as interference in its internal affairs.

In Hong Kong, the city’s Bar Association said it was “gravely concerned” by the national security law, saying offences were “widely drawn” and “are capable of being applied in a manner that is arbitrary, and that disproportionately interferes with fundamental rights, including the freedom of conscience, expression and assembly”.

It added: “In addition to the total absence of meaningful consultation, lawyers, judges, police and Hong Kong residents were given no opportunity to familiarise themselves with the contents of the new law, including the serious criminal offences it creates, before it came into force.”