Anti-monarchy protests erupted across the Australian city of Melbourne as pro-republic groups took to the streets. The demonstration happened on Thursday, the nation’s national day of mourning for the late Queen Elizabeth II. While a memorial for the Queen took place at Parliament House in Canberra, the republican rally was filmed defacing a Union Jack flag as they called for the monarchy to be abolished.

While a large crowd cheered on, two protesters began tearing the Union Jack from the corner of an Australian flag.

The footage shows the image of the Union Jack was then doused in fake blood before being held up for onlookers to admire.

As the scene unfolded, the protesters chanted relentlessly: “Abolish the monarchy!”

The demonstration was reportedly coordinated by Warriors of the Aboriginal Resistance alongside other anti-monarchy activist groups. 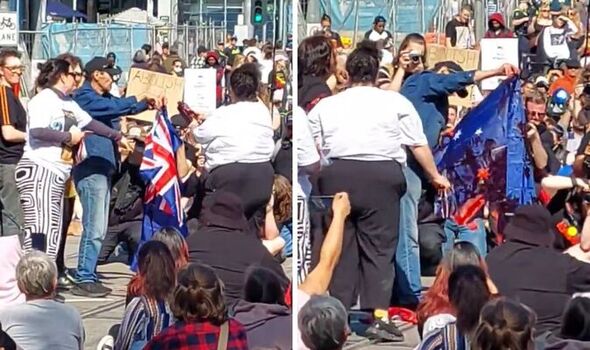 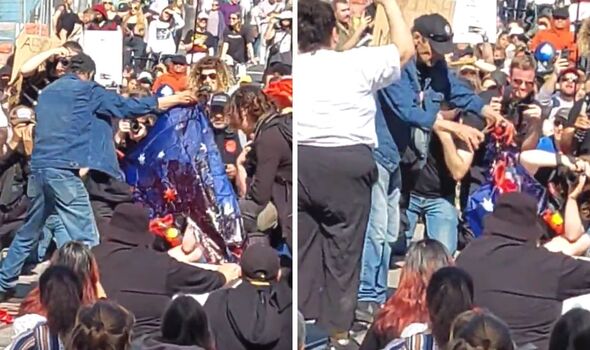 A statement released by the groups responsible for the protest read: “We stand against racist colonial imperialism and its ongoing effects on us as Aboriginal and Torres Strait Islander peoples.

“While they mourn the Queen, we mourn everything her regime stole from us: our children, our land, our loved one’s lives, our sacred sites, our histories.”

The statement added: “We do not want to be part of the Stolen (Common)Wealth.”

The protests unfolded in conjunction with Australia’s national day of mourning for Queen Elizabeth as the country’s leaders only returned from their trip to attend the Queen’s state funeral on Wednesday. 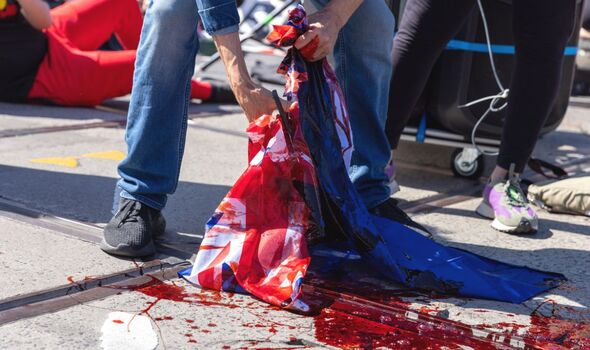 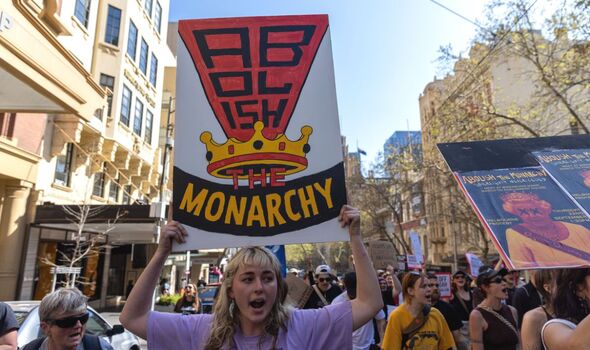 The anti-monarchy displays in Australia come after a string of similar protests against the Royal Family in the UK.

While the Queen’s coffin was held at St Giles’ Cathedral in Edinburgh, a woman was arrested after holding a placard that denounced imperialism and called for the monarchy to be abolished.

In London, another activist held a sign that read “not my king” before being hastily led away from the gates of Westminster Palace by uniformed officers.

While some welcomed the intervention of police during the demonstrations, several arrests during the ten day mourning period have since sparked a debate over rights to freedom of speech. 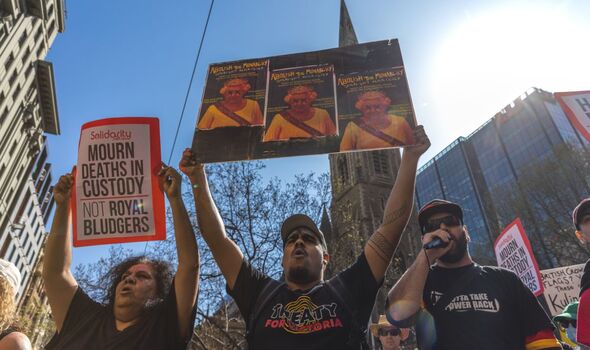 Anti-monarchy organisation Republic has been outspoken in their criticism of police intervention in peaceful demonstrations.

CEO of Republic Graham Smith said: “Free speech is fundamental to any democracy. At a time when the media is saturated with fawning over a king appointed without discussion or consent, it is even more important.”

The group has pledged to conduct widespread protests at the coronation of King Charles, expected to take place between the spring and summer months of 2023.

Graham Smith reported: “Charlies is already king. There is absolutely no need to go through with this expensive pantomime.”

The activist group claimed support for the republican movement had risen over the ten day mourning period for Queen Elizabeth II and Republic expressed confidence that momentum would continue to grow.

Read next:
Queen Elizabeth spoke of her fondness for the Fab Four
Harry ‘freaked out’ after Meghan ‘threatened to dump him’ – new claim
Meghan was ‘different’ from Prince Harry’s other royal girlfriends
King Charles III pictured carrying out official Government duties
Prince Harry ‘feared his time would run out when George was 18’