United States President Donald Trump’s pick for a US Supreme Court vacancy said she will rule based on the law, not her personal views, in prepared remarks issued on Sunday ahead of her Senate confirmation hearing this week.

Amy Coney Barrett, a conservative appeals court judge, said in her current job she has “done my utmost to reach the result required by the law, whatever my own preferences might be”.

A devout Catholic who has a record of opposing abortion rights, Barrett is likely to be probed by Senate Democrats on that issue in particular.

If Barrett is confirmed to the position by the Republican-controlled Senate, the court would have a 6-3 conservative majority. Conservative activists hope the court will overturn the 1973 ruling, Roe v Wade, that legalised abortion nationwide.

Barrett in 2006 signed on to an advertisement in an Indiana newspaper calling for Roe v Wade to be overturned. 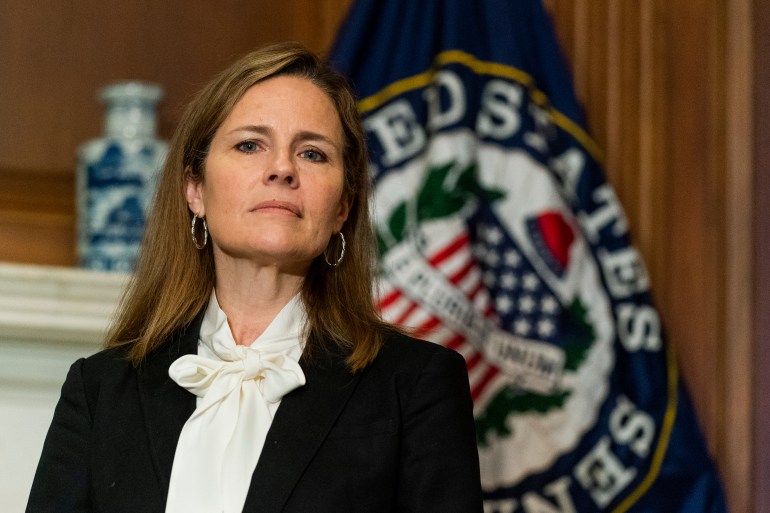 Barrett said in opening remarks the courts are ‘not designed to solve every problem or right every wrong in our public life’ [File: Manuel Balce Ceneta/AP Photo]Barrett said in the statement it will be an “honor of a lifetime” to serve alongside the current eight justices and explained how she approaches cases.

“When I write an opinion resolving a case, I read every word from the perspective of the losing party. I ask myself how would I view the decision if one of my children was the party I was ruling against,” she wrote.

The Associated Press news agency reported Barrett said in her opening remarks she will never let the law define her identity or crowd out the rest of her life. She said a similar principle applies to the courts, which are “not designed to solve every problem or right every wrong in our public life”.

“The policy decisions and value judgments of government must be made by the political branches elected by and accountable to the People,” she says.

“The public should not expect courts to do so, and courts should not try.” Republicans who control the Senate are moving at a breakneck pace to put the 48-year-old judge on the Supreme Court before the November 3 presidential election, in time to hear a high-profile challenge to the Affordable Care Act, also known as Obamacare, and any election-related challenges that may follow the voting.

US Senate Democratic leader Chuck Schumer said on Sunday Barrett should, if confirmed by the Senate, step aside from any cases involving the outcome of the presidential election and an upcoming challenge to the Obamacare health law.

Schumer, speaking to reporters in New York, said canons of legal ethics should dictate Barrett’s recusal in such cases.

Barrett has given no indication she would consider recusing herself from the cases.

The US will get an extended look at Barrett over three days, beginning with her opening statement on Monday and hours of questioning on Tuesday and Wednesday.

Democrats have pressed in vain so far to delay the hearings, first because of the proximity to the election and now the virus threat. No Supreme Court justice has ever been confirmed so close to a presidential election.

Barrett, who has seven children, would be the fifth woman to serve on the court. Before Trump appointed her to the Chicago-based 7th US Circuit Court of Appeals, Barrett was a professor at Notre Dame Law School in Indiana.