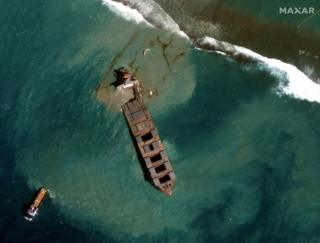 Satellite images have captured tug boats trying to remove the wreckage of a Japanese-owned ship that ran aground off the coast of Mauritius, spilling tonnes of oil into pristine waters.

It is now being towed away from the reef, a sanctuary for rare wildlife.

Meanwhile, a team of experts from Japan is travelling to Mauritius to help with the clean-up. 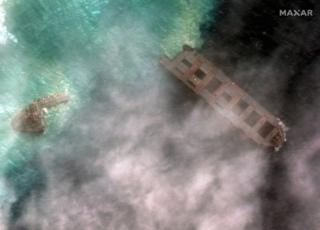 Most of the oil on board was pumped out before the ship broke apart at the weekend but nearly 1,000 tonnes leaked into the sea causing damage to the rich marine ecosystem.

An environment ministry official in Tokyo said the Japanese team would assess the impact on coral reefs. They will also take with them special materials designed to absorb oil. 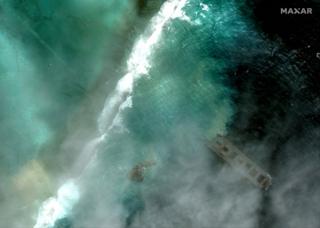 “The oil leak from the stranded ship has caused severe damage to the people of Mauritius, the economy of which largely relies on tourism and the beautiful ocean,” said Noriaki Sakaguchi, from the Japan International Cooperation Agency.

“I am terribly distressed. I would like to assess the situation and provide professional advice so that our contribution as an expert team will meet the demands of local people and the government.” 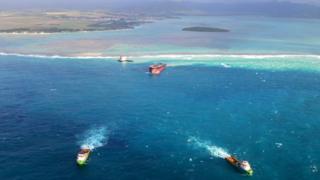 The operation to remove the bow has so far been hampered by low tides, reports the BBC’s Yasine Mohabuth in Port Louis, but it should progress as surrounding waters deepen.

Meanwhile, experts are trying to decide how to remove the rear section of the vessel, which is still aground on the reef. 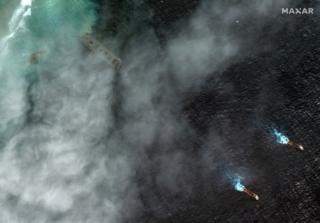 The ship’s captain, 58-year-old Sunil Kumar Nandeshwar, has been arrested over the incident and charged with endangering safe navigation.

Police said crew members had told them there had been a birthday party on the ship the day it ran aground.

Another theory being investigated is that the ship navigated close to the shore in order to pick up WiFi signal.

All images are subject to copyright.