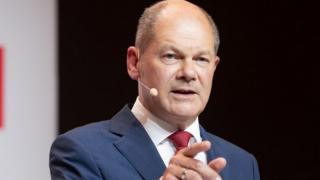 German Finance Minister Olaf Scholz was once unflatteringly nicknamed “Scholzomat” – but his old robot-like, technocratic image has been transformed by the coronavirus crisis.

The centre-left Social Democratic Party (SPD) has named the 62-year-old former Hamburg mayor as its candidate in next year’s race to succeed Angela Merkel as chancellor.

His pragmatic handling of the crisis – he is Mrs Merkel’s deputy – has won him much praise and high approval ratings among voters.

But political opponents have criticised the timing of his nomination, accusing his party of indulging in internal politics during a crisis when the country needs to pull together.

Olaf Scholz has overseen the emergency €750bn (£675bn; $884bn) funding package put together by the federal government to help German businesses and workers survive the pandemic.

“This is the bazooka that’s needed to get the job done,” said Mr Scholz. “We are putting all our weapons on the table to show that we are strong enough to overcome any economic challenge that this problem might pose.”

He chaired cabinet meetings when Chancellor Merkel self-isolated as a precaution in late March, though tests showed she was not infected with the virus.

Despite the pain of this crisis it has given Mr Scholz a chance to show himself in his element: managing a colossal amount of state welfare and fighting for social cohesion, true to his left-wing roots.

Before his SPD candidacy was announced he habitually said, when asked if he would run for chancellor, “we need to work, not indulge in vanities”.

Germany has been praised internationally for its efficient detection and testing regime – crucial to containing the virus – and its death toll is much lower than the numbers in the UK, Italy and France.

Franco-German solidarity in this crisis is also a feather in Mr Scholz’s cap, standing him in good stead for next year’s election race.

Olaf Scholz is the oldest of three brothers, and middle brother Jens heads the Schleswig-Holstein University Hospital in Kiel.

In June, Süddeutsche Zeitung reports, French Finance Minister Bruno Le Maire praised not only Olaf for his solidarity with France, but also Dr Jens Scholz, who airlifted six chronically ill French Covid-19 patients to the Kiel hospital. It was an expensive life-saving mission, paid for by the German government.

“So thank you Olaf, for all you have done already. But thanks also to your brother. It really is a great German family, the Scholz family,” Mr Le Maire said.

In SPD ranks, however, Olaf Scholz is seen as a conservative, and the party is co-led by Saskia Esken and Norbert Walter-Borjans, who are further to the left.

Mr Scholz, who is married to fellow SPD politician Britta Ernst, grew up in Hamburg and entered politics as a Socialist Youth leader, having studied labour law.

He was mayor of Hamburg from 2011 to 2018, during which time his politics became less radical. He was first elected to the federal parliament (Bundestag) in 1998.

The SPD is the junior coalition partner of Mrs Merkel’s Christian Democrats (CDU), and many SPD members dislike coalition policies, seeing them as too conservative.

So Mr Scholz has an uphill battle to revive the SPD’s fortunes. The party has lost much ground on the left to the Greens, and opinion polls suggest the CDU has a commanding lead, with the Greens in second place. The SPD has not won a national election since 2002.

Mrs Merkel will not run again – she is now in her fourth term as chancellor. The election is still more than a year off and the CDU has not yet decided on its candidate.

The SPD no longer rules out forming a future coalition with the Greens and left-wing Die Linke. But that would raise all sorts of difficulties for Mr Scholz.

Mrs Merkel remains very popular and current polls suggest that such a red-red-green coalition would be the only way for the left to govern, instead of another CDU-led coalition.

Mr Scholz is committed to Nato, while Die Linke says it would take Germany out of Nato and bring Russia into a new security organisation.

The German minimum wage of €9.35 an hour should be increased to €13, Die Linke argues. It also wants a fundamental welfare reform and higher taxes for the rich. It questions whether Mr Scholz would deliver that.