The BBC meteorologist said the significant chilling temperatures will be accompanied by widespread rain across the northwest of England and Wales. Some areas across northern England and Scotland could experience a drop of up to 12 degrees after experiencing temperatures in their mid-20s earlier in the week. The rainy weather will slowly be moving towards the east after a drier start of the day for central and eastern England.

Matt Taylor said: “Lots of cloud around and that cloud bringing further rain today across parts of the country, particularly for England and Wales.

“And much, much cooler than it was yesterday for some, 10 to 12 degrees in Scotland, northeast England especially.

“Let me show you where the rain is this morning, heaviest of which is across parts of northern England towards Dumfries and Galloway.

“This batch of rain extending across central and southern parts of England is going to head eastwards. If you start dry in East Anglia, it could get wet later in the rush hour.”

JUST IN: UK weather forecast: When will summer heat come back? Map pinpoints date of next scorcher 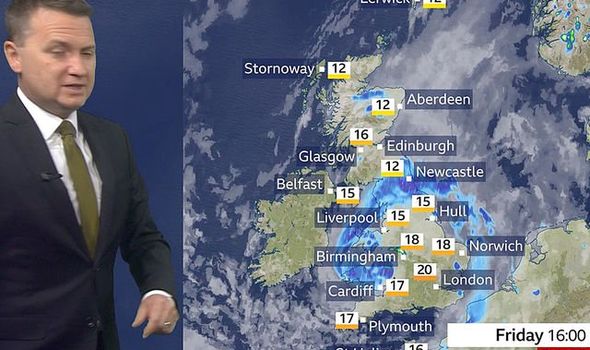 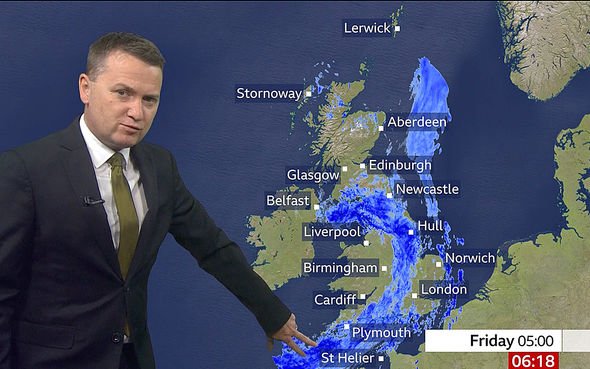 Mr Taylor continued: “Brightening up to the west at a time but then rain returns to Wales.

“It’s pretty wet for some in Northern England, especially for the northeast, and there’ll be some showers across eastern parts of Scotland.

“We saw temperatures in the mid-20s yesterday in the east of Scotland, and Northeast England, look at that – Aberdeen, Newcastle, just 12C this afternoon.

“A chilly and quite brisk wind today but because it’s coming from that direction, if you’re in western Scotland, Northern Ireland, big improvements from yesterday afternoon.” 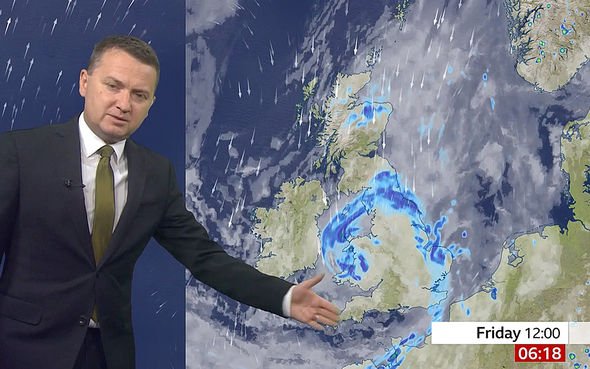 Drier conditions will mark the beginning of Friday for Wales and England but heavy outbursts of rain will plague the West Midlands through the afternoon.

Mr Taylor added: “A lot more in the way of dry, sunny weather towards the east of Wales of Northern Ireland.

“It’s Wales and parts of Northern England where it will stay wet this afternoon, heavier bursts as well working their way through the Midlands.

“A bit of afternoon sunshine, just one or two heavy showers in East Anglia and the southeast.” 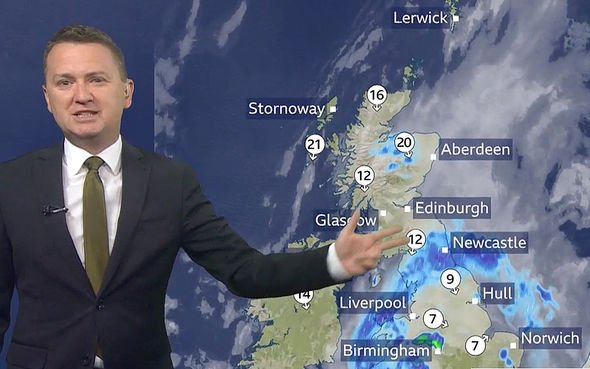 The weekend is expected to be drier across the north and west of the country following the wet conditions ruling through Friday.

Rainfall is however forecast for the southeast of England, where it is forecast to remain mostly dry today.

Mr Taylor said: “For this evening and overnight, some rain here and there, many places becoming dry and, into the weekend, it’s going to be driest in the north and the west of the country.

“Some rain across southern England.”