BBC Weahter forecaster Carol Kirkwood warned snow could hit some parts of Scotland overnight as temperatures will drop to single figures countrywide. The weather forecaster said the sudden drop in temperatures will be caused by a new front reaching the country this evening. She said: “Through this evening and overnight, clear skies and in southern areas a colder night than the one just gone.

“But for Scotland, Northern Ireland, northern England and north Wales, a weather front is coming our way and producing some rain. Behind it, it will be chilly.

“Snow over 700 metres in the Grampians. A cooler night as go further south again.”

For today’s forecast, Ms Kirkwood warned: “We have a lot of rain to start the day, but the rain will clear quite quickly by early afternoon.

“Then we’re looking at a mixture of bright spells, sunshine and showers.

“The satellite shows the amount of cloud associated with the rain we have.

“The second front is sinking south, but to the north of that, look at the speckled cloud. 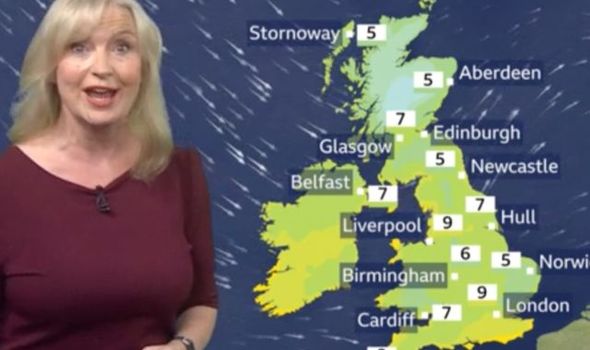 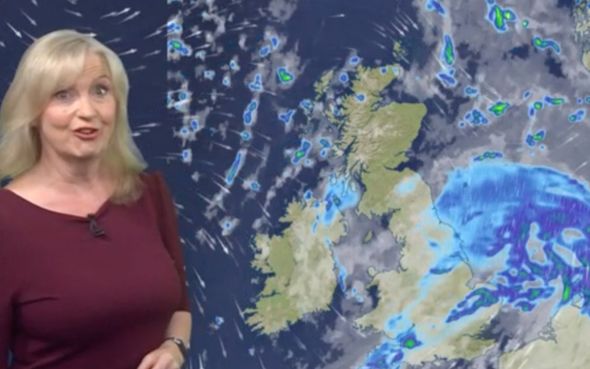 “These showers are coming our way, some heavy and potentially thundery. This morning, this is where we got rain, extending from the Isles of Scilly through Cornwall and Devon, parts of the Midlands and into East Anglia.

“Behind that, a lot of cloud and some showers. Clear skies this morning over Scotland, so it’s a nippy start for you.

“We still have the showers over the north and west of Scotland, on and off as we go through the day.

“The rain eventually clears, getting into the Channel Islands and then pushing off to the near continent.

“We hang on to some residual cloud over East Anglia, but it should brighten up for many areas with some bright spells. You can see the peppering of showers.”

October has been dominated by torrential rain that has smashed into the UK, with more than 100mm falling between last Friday and Sunday over central southern England, the Cotswolds and the Chilterns – considerably more than the monthly average in these areas.

The unsettled weather has continued into this week with further cold plunges in the north forecast over the coming days.

Strong winds and rain are also expected for all of the UK, as well as the increasing threat of overnight frost.

But the latest weather charts by WxCharts turn blue as early as today, as the UK is set to be smashed by a bitterly cold icy blast that brings with it the threat of snow.

The maps from WxCharts indicate most of the UK will be hit by a cold snap by tomorrow evening that quickly approaches from the west.

This will continue into Friday with the maps turning a darker blue, setting the weekend up for a bitterly cold few days.

The icy blast appears to worsen on Saturday morning and will continue through the remainder of day and well into Sunday, before warmer weather begins to hit Britain from the west.

But the maps from WxCharts show this relief will be short-lived, with UK maps once again turning blue on Tuesday as bitterly-cold weather blasts the country and most of Europe.

This will gradually ease off towards the end of next week, providing slightly warmer conditions going into the third weekend of the month.