The main affected areas will be in the southeast of England, with London bearing the brunt of the “very humid” air, BBC weather forecaster Matt Taylor said. But as Brits across the UK suffered through the “tropical” temperatures last night, the heat does not look likely to abate today or into the weekend. Mr Taylor predicted temperatures could reach up to 31 degrees, before culminating in “heatwave round two” over the weekend and into next week. Mr Taylor later added there was “potential” Britain could see temperatures of up to 38C next week, breaching the all-time UK record.

Mr Taylor said: “For parts of the southeast again, it is very humid. It’s been a tropical night. In the last hour we’ve seen temperatures around 22 and 23 degrees.

“But you can see the difference from north to south in temperatures. The fresher conditions, much more pleasant heat, is pushing its way southward.

“We’ve still got this zone of cloud that’s drifting towards the southeast corner; there could be a few showers on and off throughout the day.

“Temperatures will still get to around 29, 30, maybe even 31 degrees here. But it is going to be a good deal more comfortable the further north you go. 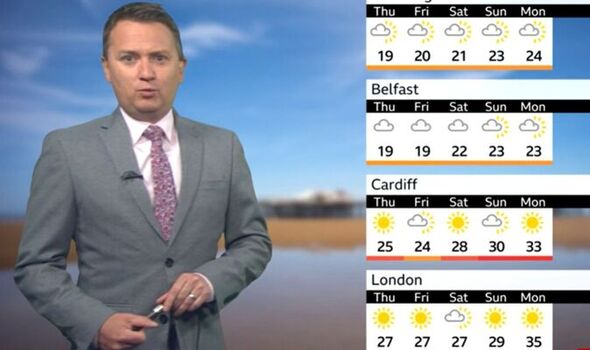 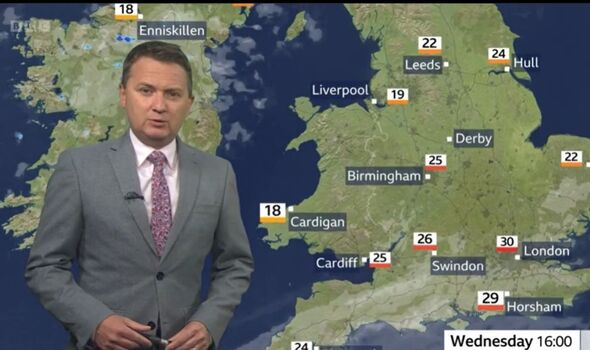 “Lots of sunshine across England and Wales. Certainly more than yesterday. But a few showers today passing through Northern Ireland and central and western Scotland.

“The breeze is still a keen one in the northwest with temperatures around 14 to 15 degrees. A good few degrees cooler than we will see in southeast England.

“Now some of that slightly more comfortable air gets to the southeast tonight. Some of that warm air, around 16 to 17 degrees. 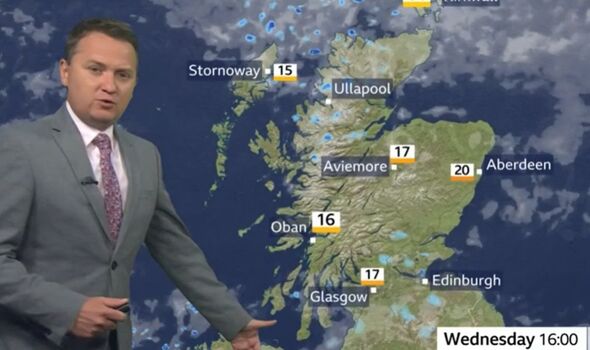 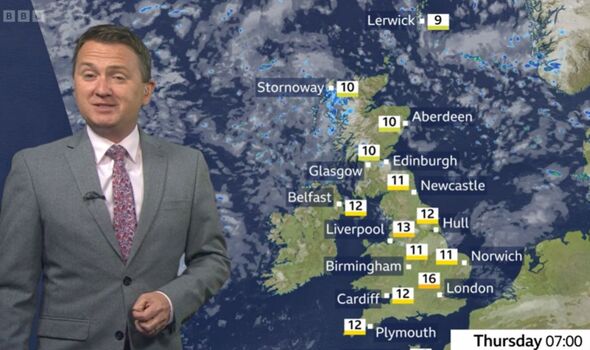 “But as we head into next week, heatwave round 2 will be well on its way.”

Wednesday, Thursday, and Friday are likely to bring some rain in the north of the UK and highs of 27C or 28C – slightly cooler than Tuesday which saw 31C in parts of south-east England.

But temperatures are expected to soar again into the mid-30s through the weekend before peaking on Monday, with south-eastern areas of the UK seeing them climb in excess of 35C, and locally into the high 30s.

Forecasters believe there is a 30 percent chance the mercury could surpass the current UK record of 38.7C, set in Cambridge in 2019, as temperatures continue to climb over the weekend and into next week.

UK braces for ‘longest heatwave in 50 years’ as more hot air inbound [REPORT]
Best beach to visit during UK heatwave – ‘Beautiful!’ [INSIGHT]
Bed sheet type ‘to avoid at all costs’ during heatwave – ‘they trap he [REPORT] 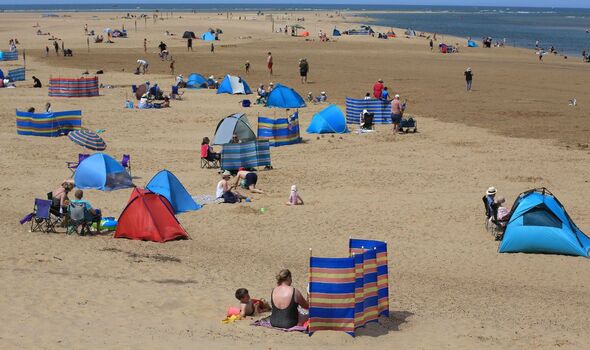 An “amber” extreme heat warning covering much of England and Wales on Sunday and Monday says there could be a danger to life or potential serious illness, with adverse health effects not just limited to the most vulnerable.

There could also be road closures, and delays and cancellations to rail and air travel, while ambulance services in England are on the highest level of alert as difficulties with the hot weather combine with Covid absences among staff and ongoing delays handing patients over to A&E.

Network Rail is preparing to introduce speed restrictions to reduce the likelihood of tracks buckling as the heatwave continues, which will cause delays to passenger journeys and disrupt freight services.

London Ambulance Service urged the public to support it as the heat continues by only calling 999 in the event of a life-threatening emergency, keeping hydrated and staying out of the sun during the hottest periods of the day.

How to keep cats cool during a heatwave – 6 ways to keep your cat safe
‘Unnecessary stress’ – four things you should never do in a heatwave
Rachel Riley looks fabulous in summery look as she hosts radio show
Level 4 heatwave warning: Who is at risk?
How to sleep: The winter warmer to beat the heatwave