The BBC Weather meteorologist noted a series of rainy fronts will cross into the UK throughout Saturday, bringing rain from west to east until the evening. The Atlantic breeze paired up with the scattered but persistent showers will leave Britons feeling a clear chill. Mr Taylor told BBC Breakfast: “There are still some clear skies but this weekend is very much a case of showers back in the forecast.

“A bit of a cool breeze to go with it as well. The breeze is coming in from a Westerly direction off the Atlantic, it’s bringing in these fronts.

“This is where more of the showers, outbreaks of rain will be focussed, particularly across the north of Scotland, where the weather front will sit across the day.

“This one is always on the move, it’s in southern Scotland at the moment, really bursts of heavy rain here, stretching down to northern England, east Wales towards Devon and Cornwall.

“It’s pushing its way southwards and eastwards through the day so it will bring some delays to the start of the cricket. Maybe some rain in Silverstone as well for the qualifiers later.” 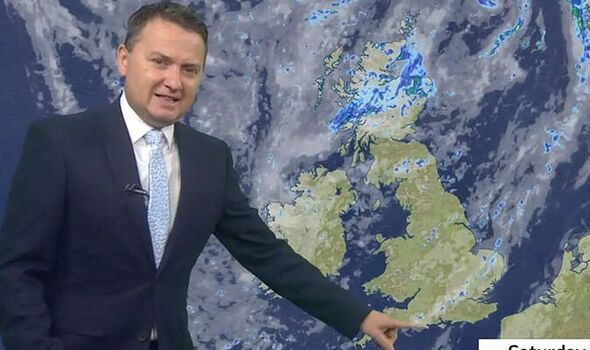 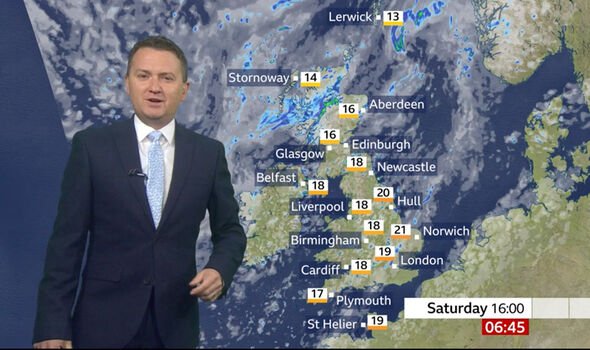 The BBC Weather forecaster continued: “East Anglia and the southeast will stay dry for the longest today, showers are not with you until we hit the evening.

“And even though you start cloudy and wet across some areas of Scotland, western England, and Wales, it will brighten up to sunshine and showers later.

“A showery day in Northern Ireland, the cloud remains persisting with the rain across northern parts of Scotland.

“Winds the lightest here, a bit of a breeze further south and so out of the sunshine, into the breeze, it does feel a bit cool for this stage in July but pleasant enough when the sun is on your back.”

Conditions will be more settled on Sunday but the breeze, while lighter, will continue to affect some areas – with some Britons waking up to single digits.

Mr Taylor added: “Those showers in East Anglia and the southeast will be with you until the evening, hit and miss until they clear.

“Further rain at times for the north of Scotland, and then a few more showers pushing into the west after a dry spell.

“Most will go into Sunday on a dry spell with temperatures between 9C and 12C.

Fitness: How to ‘increase fat burning’ in a heatwave – expert advice
Europe heatwave to bring scorching temperatures to the UK
‘Extreme drought’ cripples Italy with temperatures above 35C 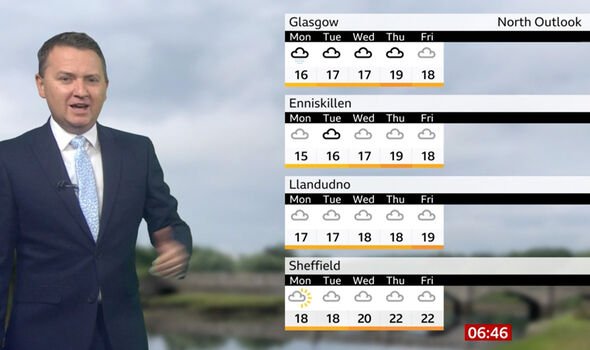 “Bright enough start to Sunday, probably brighter for many if you compare to today. Best of sunshine across eastern England to begin with, they will develop a bit more widely as they push their way eastwards through the day so western areas actually turn drier into the afternoon, with fewer showers around.

“But because showers are scattered, big gaps in between, many of you will spend the day either dry or largely dry with a few interruptions through the day and temperatures not too far off today’s values but slightly lighter wind, it may feel a touch warmer out there.

“As for next week, high pressure will try to build its way in. High pressure generally means dry, but not quite with us through much of the week.

“And around the top of it, we are going to see cloud filter its way in, so for the northern half of the country, expect a lot of cloud at times, some rain and drizzle around western coasts and hills. Best outbreaks in the east of higher grounds.”