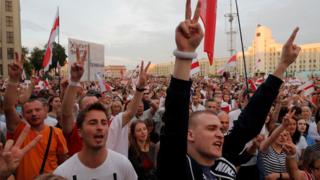 The Belarus chief prosecutor has launched a criminal case against opposition leaders, accusing them of trying to seize power.

The indictment from Alexander Konyuk says the “creation and activity of the [opposition] Coordination Council are aimed at seizure of state power, and at harming national security”.

Earlier President Alexander Lukashenko ordered police to end the mass protests against him in the capital Minsk.

His 9 August election win is disputed.

Opposition leader Svetlana Tikhanovskaya, currently in neighbouring Lithuania, announced the creation of a Coordination Council to ensure a transfer of power. She also asked foreign governments to “help us in organising a dialogue with Belarusian authorities”.

Chief prosecutor Konyuk read the indictment against the council in a video statement, saying “the creation of such bodies is not allowed in law, and they are unconstitutional.

“Several citizens, realising that such activities are illegal, have said they are quitting the council and disagree with its aims.”

There have been 10 days of street protests over Mr Lukashenko’s landslide victory, which has widely been dismissed as fraudulent.

The results have been rejected by major international powers. On Tuesday, EU leaders agreed to impose sanctions against Mr Lukashenko.

Maxim Znak, a member of the Coordination Council presidium, said several council members had announced they were leaving the new body, following the authorities’ accusations against it.

Ms Tikhanovskaya told EU leaders via video that the council would lead the process of a “peaceful transition of power via dialogue” and call for “new, fair and democratic presidential elections with international supervision”.

But on Wednesday, Mr Lukashenko approved a cabinet that would see Roman Golovchenko retain his role as prime minister, with many other key members of the previous government reappointed, the Tut.by news network reported.

Among those on the list to remain in place was Interior Minister Yuri Karayev, whose responsibilities include policing and public security.