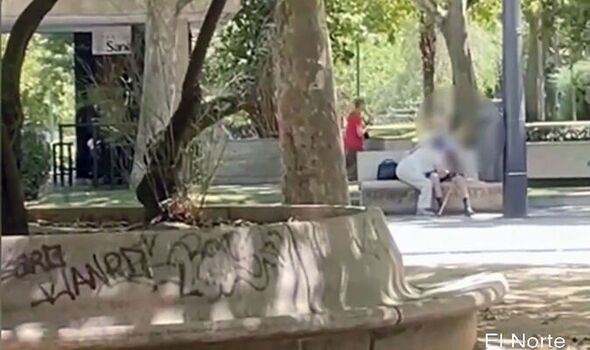 Horrified onlookers alerted police after the brazen woman in her seventies was spotted pleasuring the man of around the same age in broad daylight. The woman, wearing white, can be seen bending over the man’s lap in the park in Zamora near Spain’s border with Portugal.

Pictures show the pair, both holding walking sticks, being spoken to by staff after the lewd act.

Stunned mothers playing with their children are said to have witnessed the unnamed woman bend over the man and pleasure him on a bench in La Marina Park in Zamora.

Police confirmed the pair were identified at the scene so they can be sent fines for lewd behaviour in a public place. 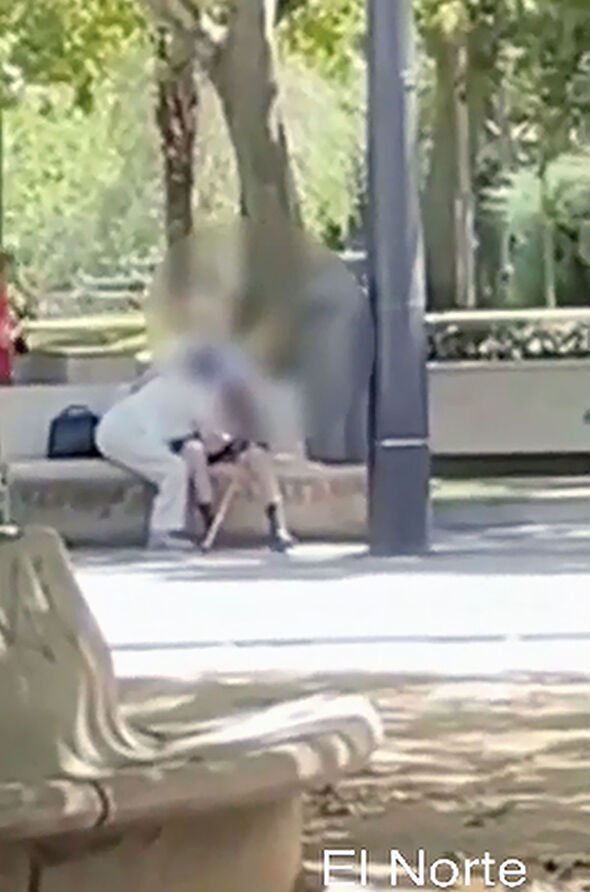 Their nationalities and the size of the fine they will face remains unknown.It comes after a couple were filmed in the throes of drunken passion by a recycling bin in Benidorm in June last year.

A man dressed in a black shirt and beige shorts was seen standing behind a woman in a floral-patterned dress.

The woman, pressed up against the large green plastic recycling bin, had her back arched as the man’s hand moved back and forth under her skirt.

Passing drivers and stunned onlookers in the street were heard cheering.

One officer was filmed hitting them in the back with his truncheon.The video was shared on Twitter and captioned: “Only in Benidorm.”

Recently, Spain imposed a new rule banning all-inclusive alcohol in the most popular holiday spots, including Majorca and Ibiza.

The legislation bans happy hours, pub crawls and two-for-one drinks, as well as the sale of alcohol in shops between 9.30pm and 8am, and forbids the advertising of party boats in designated areas.

Spanish chiefs say they hope to attract “fewer, but better” tourists to the islands as it continues its crackdown on tourists.

He said: “British tourism is essential for our islands.

“We share with the British Government the view that some images of British tourists are embarrassing.

“We want to put a stop to bad behaviour.

“From April to May this year we will increase the police presence in these areas and the number of inspectors.

“We will have zero tolerance for tourism excesses.”