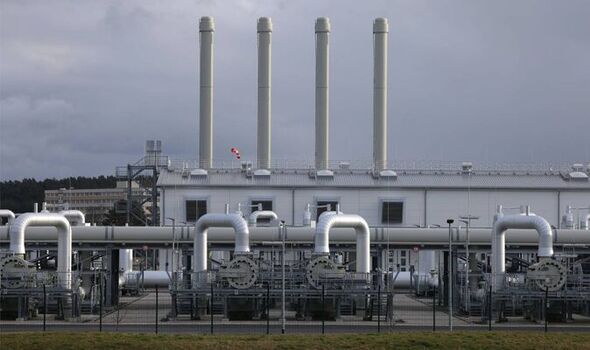 The US president said the measures were only the “first tranche” and he would “escalate sanctions if Russia escalates”. Mr Biden announced heavy financial sanctions against Russian banks and oligarchs, and added: “Because of Russia’s actions we have worked with Germany to ensure Nord Stream 2 will not move forward.”

He said: “As Russia contemplates its next move, we have our next move prepared as well. Russia will pay an even steeper price if it continues its aggression, including additional sanctions.”

It comes after Mr Scholz announced earlier in the day: “The situation has fundamentally changed.”

Nord Stream 2, which runs under the Baltic Sea from Vyborg to Lubmin, is designed to double the amount of gas flowing from Russia straight to Germany, bypassing Ukraine in the process.

The controversial project has faced resistance in the European Union, from the US and Ukraine because it increases Europe’s energy dependence on Russia, as well as denying Ukraine any transit fees and making it more vulnerable to Russian invasion.

No 10 said the Prime Minister believes it is right to “snip the feed of Nord Stream from our bloodstream”. Asked if Boris Johnson was pleased by the move, his spokesman said: “Yes. I think this has been something the Prime Minister has been calling for, for some time.”

What is the cause of tension in the region?

Difficulties date back to the overthrow in 2014 of the pro-Moscow Ukrainian government of Viktor Yanukovych, prompting fears in the Kremlin that the country was moving into the orbit of the West. President Vladimir Putin responded by sending in troops to annex Crimea while Russian backed separatist rebels seized territory in eastern Ukraine in bloody fighting with the Ukrainian military.

What has happened now?

Mr Putin has signed a decree recognising the two Russian-backed regions – Donetsk and Luhansk – as independent states. He has ordered troops into the two areas to “maintain peace” – crossing the red line set by the West by deploying Russian forces on Ukrainian territory.

What has been the response?

The UK, European Union and US will all impose economic sanctions. Prime Minister Boris Johnson said the measures the UK is enforcing were the “first barrage” because further action would be taken if the situation escalated.

The Western allies will hope the economic pressure it can exert through sanctions will persuade Mr Putin to back down. But the Russian premier has an estimated 150,000 troops ringed around Ukraine and Mr Johnson warned “all the evidence is that President Putin is indeed bent on a full-scale invasion of the Ukraine”. An attempt to conquer the country could lead to a prolonged and bloody conflict.

Could there be a wider war?

Ukraine is not a member of Nato, so the alliance’s members – including the UK – will not play a direct role in any fighting. The UK has supplied anti-tank weapons to the Ukrainian army and other support is being considered. But Russian aggression in eastern Europe is likely to increase anxiety among the members of Nato. This could lead to a further build-up of forces, and risks potentially cranking up tensions even further in the region.

What is the advice for Britons in Ukraine?

British nationals have already been advised to leave – in an email sent by the Foreign Office last Friday – while it is still possible to do so. Melinda Simmons, the British ambassador in Ukraine has relocated from the embassy in the capital Kiev to Lviv, in the west of the country, due to risks posed by a Russian invasion. She reiterated the Government’s advice in a message yesterday, saying: “I strongly advise British nationals to leave the country while commercial travel is available.”