The president’s plan, worth up to $4 trillion, represents a fundamental shift in the way Democrats talk about tackling climate change: It’s no longer a side element. 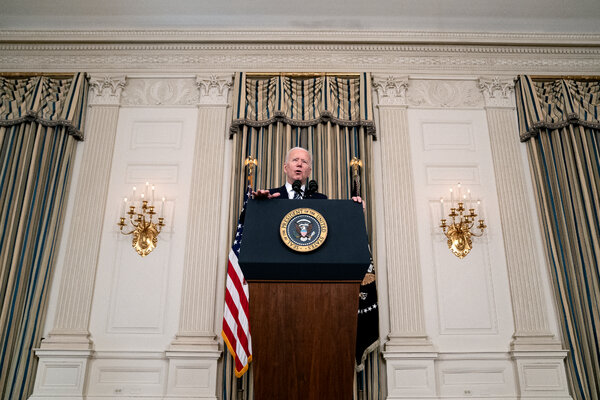 By Lisa Friedman and Jim Tankersley

WASHINGTON — President Biden’s next big thing would fuse the rebuilding of America’s creaky infrastructure with record spending to fight climate change, a combination that, in scale and scope, represents a huge political shift, even for Democrats who have been in the climate trenches for decades.

A guiding philosophy of the Biden proposal argues that the future of good jobs is the transition to an economy that no longer churns out carbon dioxide through the burning of coal, oil and gas.

Aides are set to brief Mr. Biden this week on plans to invest between $3 trillion and $4 trillion in spending and tax credits on a wide range of efforts meant to bolster the economy. The money is currently planned to be split between two packages, starting with an infrastructure bill that is rooted in the effort to halt the emissions of planet-warming carbon dioxide. Administration officials stress that the details remain in flux.

But as currently constructed, accelerating a clean energy transformation underpins nearly every part of the plan, people familiar with it said. It includes building electric power lines that can deliver more renewable energy, building electric vehicle charging stations, capping oil and gas wells to reduce emissions and reclaiming abandoned coal mines. There is money to build a million new affordable, energy-efficient housing units and to make existing structures more energy efficient. Hundreds of billions of dollars would go toward “high-growth industries of the future,” such as advanced battery manufacturing.

The underlying message — that the next step of America’s economic recovery is fundamentally tied to countering the climate crisis — represents a major pivot in the way Democrats make the case for tackling global warming. No longer merely an environmental imperative like saving the polar bears, or a side element of a stimulus package like it was under the Obama administration, climate change has become the centerpiece.

Administration officials say they view averting catastrophic warming and pursuing American dominance of the emerging global industries as inseparable. That is a sharp break from even the most recent Democratic administration, when Mr. Biden was vice president, let alone the Trump era, when the president denied the existence of climate change.