The next phase of a $50 billion plan to protect the Louisiana coast from erosion and rising sea levels has cleared an important hurdle, with the Army Corps of Engineers delivering a long-awaited environmental impact statement for a key part of the project.

The report, issued Thursday evening, looked at a proposal to punch a hole in the Mississippi River levee. The corps said the move would largely benefit coastal areas in the state, though it might also affect some marine life, especially bottlenose dolphins, and could cause problems for those who make their living from raising and catching seafood in the area.

“This is what climate adaptation looks like at scale,” said Chip Kline, chairman of the Louisiana Coastal Protection and Restoration Board. “This project, in our mind, is the lifeline for our coast.”

Money for the project will come from penalties paid by BP for the damage caused by the Deepwater Horizon oil platform disaster in 2010, which killed 11 rig workers and spilled some 200 million gallons of oil into the Gulf of Mexico.

The new project, formally known as the Mid-Barataria Sediment Diversion, is, of course, more complex than punching a hole in a levee.

If the corps issues final permits, which could happen as early as next year, a $1.4 billion structure will be dug into the western bank of the river below New Orleans. It will include gates that allow operators to control the flow of water and sediment from the mighty river into Barataria Bay, nearly an Olympic swimming pool’s worth of water every second.

By letting fresh water and sediment flow from the river into the depleted wetlands of Barataria Basin, the diversion will mimic the spring floods that were common before people built levees to contain the river — floods and sediment that built the Mississippi Delta in the first place. Without those regular deposits, the land has subsided. Further damage from activities like oil exploration cut channels into the delicate wetlands and let destructive salt water intrude into the delicate marshes; all that and rising sea levels have combined to cause the loss of some 2,000 square miles of land in the last 100 years.

The corps evaluated seven alternative ways to build and operate the diversion, including the option to do nothing. The state’s proposal, it found, would build some 17,300 acres of new land after 30 years. And while sea level rise from climate change is expected to cut into some of those gains over time, greater New Orleans would still be helped by the equivalent of a “speed bump” for hurricanes.

The report also estimated that more than 12,000 jobs would result from the project, which will take five years to complete once it has been approved. After a period for public comment on the new report, technically a draft, the final environmental impact statement will be published and the permit could be issued next year. 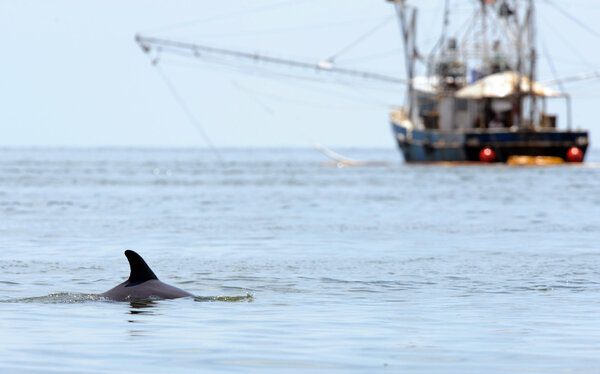 The project “is needed to help restore habitat and ecosystem services injured in the northern Gulf of Mexico” as a result of the 2010 spill, the environmental impact statement said.

The river water will inevitably change salinity levels in Barataria Bay, which will have repercussions for marine life in the area.

The environmental impact statement said that dolphins would be especially hard hit by the changes. It suggested that 30 percent of the bottlenose dolphins in the Barataria Basin could die or be driven away.

In 2018 Congress provided a waiver for the project from federal laws protecting marine mammals. Oyster and brown shrimp populations would also be strongly hit by the change in salinity, while white shrimp were expected to be less affected. Alligators, the report found, would do somewhat better.

The Louisiana coastal authority also issued a new report that discussed the diversion, and which focused on how it plans to counteract the negative effects.

Those initiatives include millions of dollars to monitor dolphin populations and protect them, as well as helping to pay to relocate oyster beds to areas that will have the right level of salinity. They also plan to provide funding to upgrade boats with refrigeration and more efficient engines to make longer trips possible if the close-in waters of Barataria Bay are no longer suitable for oysters.

It also said it would be providing funding for retraining for people whose jobs may disappear and to provide some relief for the vulnerable poor and minority communities that depend on the waters for subsistence fishing and for their livelihoods.

Some officials acknowledge having mixed feelings. “I do believe the project should be built, but I have a lot of questions,” said Richie Blink, a council member of the Plaquemines Parish government. “We need to make sure the people who are impacted most by the structure and the project have some say,” he said. “We need to make sure there’s a safety net for those folks.”

Those who have expressed opposition to the project in the past said they were not changing their positions because of the governments report. Tracy Kuhns, executive director of Louisiana Bayoukeeper, an organization that opposes the diversion, said she preferred another, faster method the state has employed to build land: dredging sediment directly from the river and pumping it into place. That land-building method is more expensive, however, and needs regular replenishing; the diversion is designed to replenish the wetlands continuously.

Byron Encalade, a longtime oysterman who opposes diversions, applauded whatever efforts the state might take to address the damage to the fishing communities. “Anything that will help, I’m not going to say no,” he said, but called the efforts “too little, too late.”

Coastal officials point out that the ongoing damage to the state means that change is inevitable, and that their plan will help avert some of the worst consequences of erosion. “Things are heading in the wrong direction without the project,” said Bren Haase, executive director of the state coastal authority. He said that he understood the fears of people who oppose it. “The purpose of the project is to effect change, and change is a scary thing.”

However, he added: “The alternative is unthinkable. It’s a coastal Louisiana that doesn’t exist. That’s just not an option in my mind.”