Britain’s vaccine watchdog declined on Friday to endorse Covid shots to all children between 12 and 15 years old, advising the government that the health benefits were only “marginally greater than the potential known harms,” and the margin was “too small to support universal Covid-19 vaccination for this age group at this time.”

However, the watchdog, the Joint Committee on Vaccination and Immunisation, suggested that officials could seek further input from the United Kingdom’s chief medical officers, who hold advisory positions similar to that of the U.S. surgeon general.

Top health officials immediately did so, a move that raises the possibility that U.K. governments could take the extraordinarily rare step of not abiding by the committee’s judgment.

Sajid Javid, Britain’s health secretary, said in a statement that he had joined with the health ministers of the four U.K. nations — England, Scotland, Wales and Northern Ireland — in writing to their chief medical officers to request assessments of the value of expanding vaccination eligibility to all 12- to 15-year-olds. Mr. Javid’s statement said the advice would be considered and that a decision would be made “shortly.”

The committee explained its caution as stemming from two factors: the very low rates of severe Covid in the young and the “extremely rare” reports of inflammation of the heart muscle after receiving mRNA vaccines — those made by Pfizer-BioNTech and Moderna — in younger adults.

The committee had already recommended vaccinations for those in the age group with health conditions like severe neurological disorders or immunosuppression that increase vulnerability to severe Covid, as well as for those living with an immunosuppressed person. On Friday, it advised broadening the list of the qualifying conditions to include conditions like heart disease, severe asthma, sickle cell disease, Type 1 diabetes, cerebral palsy, autism, epilepsy and muscular dystrophy.

That would open eligibility to 200,000 more young people, the BBC reported. 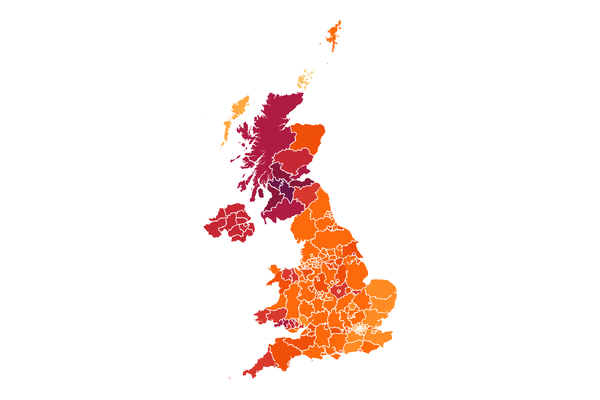 See the latest charts and maps of coronavirus cases, deaths, hospitalizations and vaccinations in United Kingdom.

Britain was one of the countries hardest hit in the first wave of the pandemic, and suffered an enormous winter surge in which Covid deaths averaged 1,200 a day. The Delta variant drove another surge this summer, reaching a peak of 60,000 cases in mid-July. Cases fell to half that within two weeks, though they have since been climbing again.

However deaths remain relatively low at around 100 a day, a fact British officials say demonstrates the power of vaccination to break the link between infections and severe disease. Even with millions of younger people ineligible, 63 percent of the entire population is fully vaccinated.