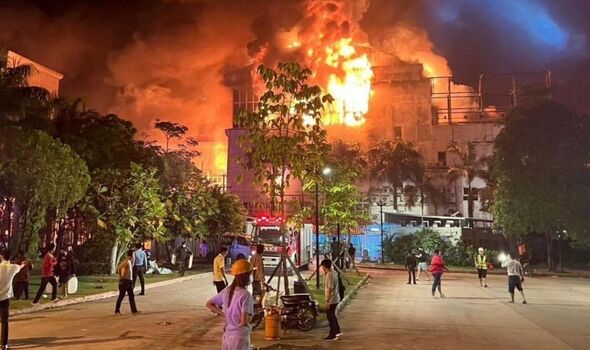 The fire began at the Grand Diamond City Casino in Poipet, Cambodia around midnight (5:00pm GMT Wednesday) on Thursday. Shocking footage on social media has shown the hotel and casino engulfed in flames and smoke as people hang outside of windows calling for help.

The Cambodian authorities have reported that at least 400 people were inside the hotel when it caught fire.

Thailand’s public broadcaster, Thai PBS, has reported that 50 Thais, including both customers and workers, were among those trapped in the building.

The town of Poipet is a key crossing between Thailand and Cambodia and is popular for its casinos with Thai travellers as gambling is mostly prohibited in Thailand without the approval of the goverment.

Disturbing footage shared on Twitter has shown people appearing to be jumping or falling off the building on the upper floors.

Reports have stated at least 50 more people were still trapped inside the building.

Oum Rath, governor of Banteay Meanchey province, said to local media that efforts were being made to bring the fire under control.

Emergency services from Thailand have been brought in to tackle the fire, which included five fire trucks and ten rescue vans.

The General Commissariat of the National Police reported that firefighters were still trying to distinguish the fire in the early hours of Thursday morning.

Keat Hol, the mayor of Poipet also said: “As of now, the fire continues to burn quickly and the extent of the damage has not yet been estimated.”

Authorities are still working to determine the cause of the fire.