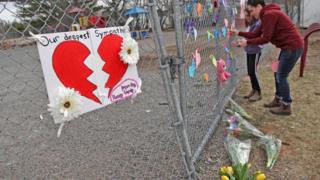 The toll from the worst mass shooting in Canada’s modern history has risen to 23 from 19, police say.

Among the deceased is a 17-year-old not identified by authorities, who previously believed all the victims were adults.

The 14-hour deadly rampage unfolded in the province of Nova Scotia between Saturday evening and Sunday morning.

Police say some victims were known to the gunman and were targeted while others were not.

The updated death toll was released on Tuesday in a statement by Nova Scotia Royal Canadian Mounted Police (RCMP), along with a rough timeline of the tragic events.

Police had previously warned the number of dead could rise as they searched the 16 separate crime scenes across north and central Nova Scotia.

Their work was also slowed by the fact there were a number of fires started – about five, according to police. They had to search through the debris of those badly burnt-out homes for remains.

Investigators have said the full investigation will likely take months.

The rampage began around 22:30 local time (01:30GMT) in the rural beachside community of Portapique.

Police received multiple calls to the emergency services reporting gunshots, and responders found “several casualties inside and outside of a home” but no suspect.

They also discovered “multiple sites in the immediate area, including structures and vehicles that were on fire”.

During at least part of the rampage the gunman used “a very real look-alike RCMP vehicle”.

That vehicle was found at the crime scene where 23-year RCMP veteran Const Heidi Stevenson was killed in the line of duty.

Authorities also confirmed on Tuesday the gunman was wearing an authentic RCMP police uniform. He did not work for any police force.

Victims were also found in the communities of Wentworth, Debert, Shubenacadie/Milford and Enfield, where police shot the gunman.

Little is known about what motivated the suspect, 51-year-old Gabriel Wortman, or how he chose his victims.