The sauces on the table remain untouched — plain is fine, thank you.

Is that some sort of red flake? Better pick around it.

Traveling to a country known for its red-hot cuisine? Cross your fingers that you can find the one mild dish on the menu.

Those who love spicy food might find these behaviors pitiable. But to those who struggle with spiciness and culinary heat, they may be part of a routine mealtime negotiation that involves stepping around potential land mines that will produce agonizing pain and make the food all but inedible.

A resistance to spiciness can produce shame as well as taunts from others who see their love of spiciness as an act of courage or a mark of more refined tastes. Others who don’t like the spiciness — myself included — might counter with, ow, it really hurts, and how could anyone possibly enjoy this sensation?

But for those who would like to wipe their aversion away, opening themselves up to a much fuller world of flavors and experiences, experts offer some solace: Yes, most people can train themselves to eat spicy food.

“It is absolutely possible to do that,” said John E. Hayes, a professor of food science and the director of the Sensory Evaluation Center at Penn State University. “We have the laboratory data to show that even in a few weeks you can increase your tolerance.”

For some people, it may take much longer than a few weeks. But experts say there do not appear to be any genetic factors preventing most people from liking spicy food. It’s more about repeated exposure.

Alissa A. Nolden, a professor of food science at the University of Massachusetts Amherst, conducted an experiment with people who reported not liking spicy food. 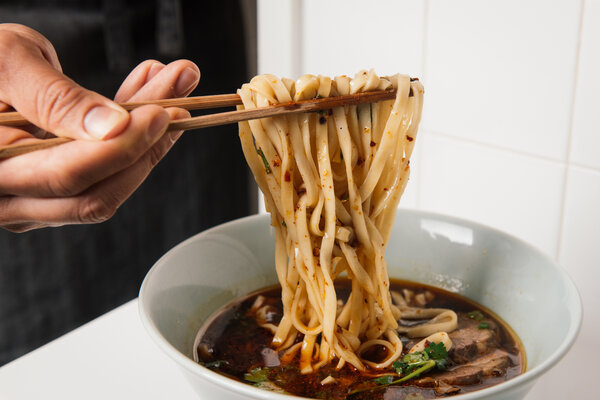 For three weeks, the researchers had the subjects rinse in the morning and at night with a mouthwash containing capsaicin, the active component in peppers that creates a burning sensation. They were asked to record how intense they thought the heat was each time.

The researchers observed “a huge change in intensity rating” toward the end of the experiment, Dr. Nolden said.

Much of the disparity in people’s perceptions traces back to what kind of food they ate as children, said Mary-Jon Ludy, a professor and chair of the department of public and allied health at Bowling Green State University in Ohio. A child raised in Mexico or India, or raised in the United States by parents who cooked spicy food, is more likely to seek out spiciness as an adult than those raised on blander diets.

Dr. Ludy herself grew up without spicy food, not trying it until she went to an Indian restaurant in college. It “set my mouth on fire,” she said. Though she likes spicy food now, she still does not enjoy more intense heat.

“For folks who don’t consume spicy foods on a regular basis, even a small amount seems to overwhelm the ability to experience flavor and enjoy the other components of foods,” Dr. Ludy said.

Those who have learned to like spicy food as adults often tell a similar story: They slowly ramped up their exposure, trying medium Buffalo wings after they became accustomed to mild Buffalo wings, or progressively adding chili flakes to their meals. Some people say they rapidly adapted their tastes. Others say it took them years.

Dr. Hayes of the Sensory Evaluation Center says there is little to immediately show for the efforts. Unlike beer or coffee, which some people find distasteful at first but come to appreciate for their immediate effects, spicy food doesn’t leave reluctant people feeling anything positive after trying it, he said.

One technique he recommends is to take a page from training a dog or a child. Reward a reluctant person for eating spicy food by offering verbal praise, positive affirmation or other incentives.

But those undertaking the journey should be aware that they might build a willingness to eat spicy food without ever developing the burning desire for it seen in others, Dr. Hayes said.

“You could become more tolerant while still hating it,” he said.

Sara Kay, a 32-year-old in Bratislava, Slovakia, who was raised in Rockville, Md., said it was not hard avoiding spicy food for most of her life. Her parents’ cooking was delicious but not spicy. Later, she attended culinary school in France, where the cuisine did not require much spiciness.

Her turning point came in 2013 when a friend took her to Xi’an Famous Foods in New York. She tried a salad that was numbingly hot, but despite the pain she still loved the taste of it.

“I’m crying while I’m eating this salad, but I felt like I needed to embrace it,” she said.

After that, she started adding Frank’s RedHot sauce to more of her dishes, and then Sriracha. She has trained herself to enjoy it more and more, and now appreciates that she can order more items off menus, she said.

For Shane Leigh, 46, his longtime distaste for spicy food was wrapped up in his identity issues, he said.

The son of two Jamaican immigrants who often cooked with jerk sauce and made curried goat and chicken, he grew up in the Kensington neighborhood of Brooklyn around people who were mostly of European descent, many of them Italian or Irish. To fit in, he thought he needed to shy away from his heritage, including its food.

“There was a disconnect for me with what I was living at home and what I thought was the path to popularity when I left the home: hamburgers, hot dogs and pizza,” he said.

But in his 30s, he became more interested in his heritage. And his wife, the daughter of immigrants from Hong Kong, also had an aversion to spicy food.

So they slowly worked to embrace spiciness together, gradually building up their tolerance over several years. Now they have both adjusted, and even crave foods they couldn’t stand before.

“Embracing the food from the place where my parents are from is sort of like a homecoming that you didn’t know you needed,” Mr. Leigh said.

And now your author will confess that this has also been self-help disguised as reporting, as my inability to handle spiciness has carried a significant social cost.

At times I feel no need or desire to adapt, because, ow, it is intense pain and I am nowhere near enjoying it.

But I am well aware that this approach to eating has its limitations.

It isn’t fun to sheepishly ask friends to taste-test curries at the Indian restaurant for you, or to disappoint everyone by asking if a shared dish can be served mild, or to admit you won’t be able to split your dinner companion’s favorite appetizer.

I am often told I’m missing out not just on flavors, but also on the way they’re woven into cuisines from other cultures that I would otherwise like to experience.

So I’m working on it. Maybe getting punched will be nice someday.