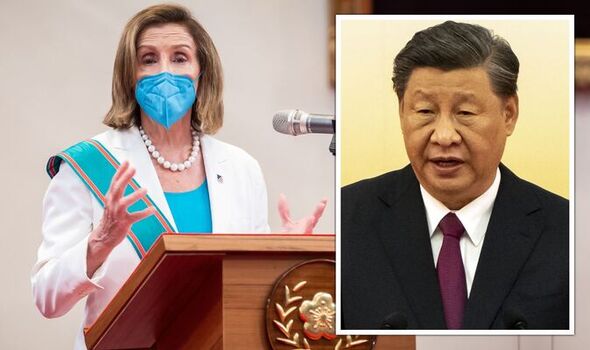 Tension between Beijing and Washington heightened as Ms Pelosi became the first senior US official to visit the self-ruled island since 1997.

It marked a significant show of support for Taiwan, which Beijing claims as part of its territory, to be annexed by force if necessary.

China views visits by foreign officials as recognition of the island’s sovereignty.

As Ms Pelosi’s plane touched down, the Chinese government immediately announced plans to conduct live-fire drills and joint military operations around Taiwan. Dozens of tanks were filmed lined up on its coast aimed at the island.

It would be the first time they have fired missiles into the sensitive strait since 1995.

The US has vowed to defend Taiwan if China invades – increasing fears of war between two superpowers.

John Kirby, White House national security spokesman, said after Ms Pelosi’s arrival that America was “not going to be intimidated” by threats or bellicose rhetoric from China.

China’s foreign ministry responded by slamming the visit as “extremely dangerous”. It said the United States “has been attempting to use Taiwan to contain China”, and added: “It emboldens ‘Taiwan independence’ separatist activities. These moves, like playing with fire, are extremely dangerous. Those who play with fire will perish by it.”

Ms Pelosi said last night: “America’s solidarity with the 23 million people of Taiwan is more important today than ever, as the world faces a choice between autocracy and democracy.”

She added that her trip “in no way” contradicted official US policy, which recognises “one China” and has not officially recognised Taiwan as an independent state.