Many friends and colleagues have been trying to locate and contact Ms Cheng Lei since mid-August but had not been able to track her down. It has since emerged the journalist has been detained indefinitely by the Chinese authorities. Australian authorities confirmed on August 27 Ms Cheng Lei was allowed contact with the nation’s embassy via video link.

A statement said: “The Australian Government has been informed that an Australian citizen, Ms Cheng Lei, has been detained in China.

“Formal notification was received on 14th of August from Chinese authorities of her detention.

“Australian officials had an initial consular visit with Ms Cheng at a detention facility via video link on 27th of August and will continue to provide assistance and support to her and her family.”

Australian officials have yet to report on her condition. 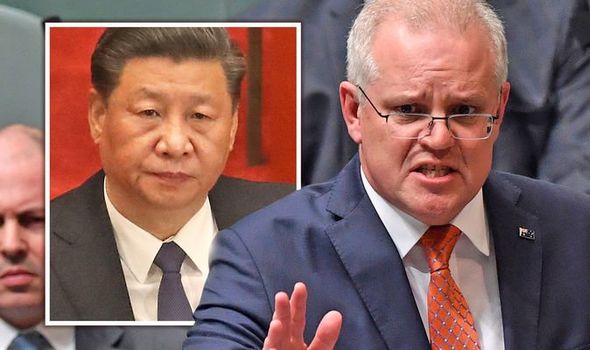 “Apart from being a top-notch journalist, able to do solid stories even inside China’s massively flawed media, Cheng Lei is an Australian of great character, now held in a secret location in Beijing without charge.”

It has been stated that she is under “residential surveillance at a designated location” by the Chinese authorities.

This kind of house arrest in China is a terrifying prospect for the Australian mother of two.

JUST IN: World on the brink: Beijing issues dire warning over US missile plan

Illustrating the type of conditions she may be held under BBC China correspondent Stephen McDonell tweeted: “China’s ‘residential surveillance at a designated location’ probably worse than being in say a detention centre.

“Suspects can be held for months, interrogated at some secret location, woken at all hours for sleep deprivation treatment, with no access to a lawyer.”

Her very existence seems to have been erased from the CGTN website, the Chinese broadcaster where she used to be employed.

She is the second Australian to be detained since the recent break down of relations between the two countries.