Play was halted and a minute’s applause held for Christian Eriksen as his Denmark teammates played Belgium at Euro 2020.

All 22 players stopped after Belgium kicked the ball out in the tenth minute and the entire stadium began clapping in a tribute to Eriksen – who wears the number 10 shirt.

His Danish colleagues hugged their Belgian counterparts, while fans held up banners supporting him in Denmark’s first game since his collapse. 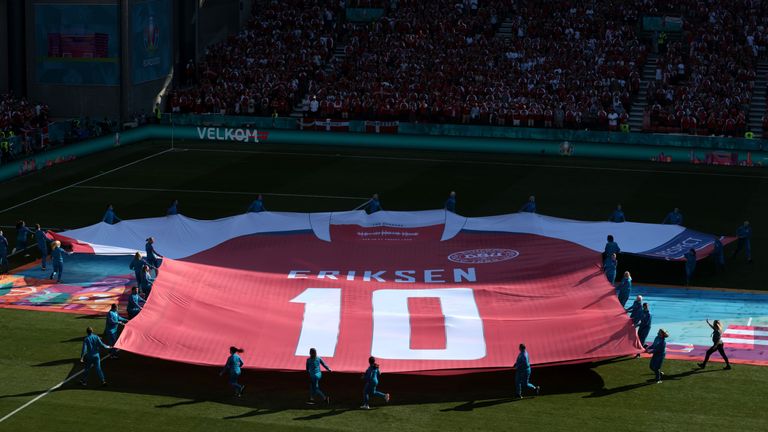 Before the match, a huge number 10 Denmark shirt, estimated to be 20-25 metres long, was brought onto the pitch and You’ll Never Walk Alone was played, to universal applause.

The Inter Milan and former Tottenham midfielder collapsed on the pitch after suffering a cardiac arrest in their first match against Finland on Saturday.

Eriksen, who is recovering in a nearby hospital after medics saved his life, promised to be wearing his own team shirt while watching the game from his bed. 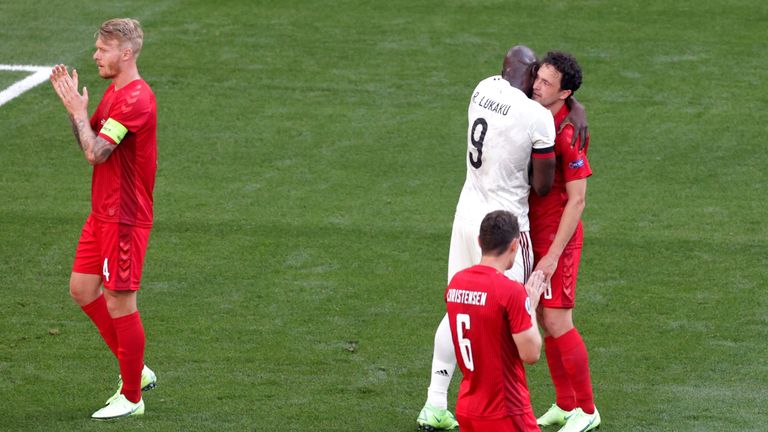 The hospital is close enough to Parken Stadium that Eriksen was expected to hear the tribute from his room.

In the game, Yussuf Poulsen scored in the second minute to give Denmark a 1-0 lead, before Thorgan Hazard equalised in the 54th minute, with Kevin De Bruyne sealing the win quarter of an hour later.

Earlier it was announced that Eriksen is to be fitted with an under-skin heart starter device.

The decision was made following several “different heart examinations” and Eriksen has “accepted the solution”, the national team doctor said.

The heart starter, known as an ICD, is designed to correct the rhythm of the heart if it notices a potentially dangerous pattern by issuing a number of small or larger electric shocks.