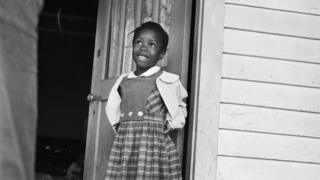 A civil rights activist who was one of the first black children to be integrated into an all-white school in the US has taken over Selena Gomez’s Instagram account.

Ruby Bridges shared archival footage from protests outside the school she attended in Louisiana in the 1960s.

She also urged the singer’s nearly 180m followers to stay united in the “fight to save black and brown lives”.

Gomez is one of the most followed celebrities on Instagram.

For the past week, Gomez has been giving over her social media account to black leaders and activists to highlight their work.

Ms Bridges told Gomez’s followers on Sunday that she was sharing the archival footage from outside William Frantz Elementary School in New Orleans in 1960 because “it will help you to understand why I think we, black and brown sisters and brothers, need to stand united in this fight to save black and brown lives”.

Hello I’m Ruby Bridges. In 1960 I was the first Black child to integrate an all-White elementary school, William Frantz Elementary, in New Orleans, Louisiana. Over the years I have dedicated my life to promoting tolerance and unity. During this Civil Unrest, it’s crucial we stand united to protect Black & Brown lives! We thank our sister Selena for allowing me to tell my story and bring more awareness to the importance of this moment, on this amazing platform!⠀ ⠀ — Ruby Bridges (@rubybridgesofficial)

The footage is a two-minute excerpt from the documentary The Children Were Watching, which looks at the early days of school integration in New Orleans.

It depicts the chaos faced by Daisy Gabrielle, a mother who defied protests and brought her white daughter Yolanda to the newly integrated school when most white parents where keeping their children away.

“It was important to me to show her story to the world,” writes Ms Bridges in the Instagram caption.

Who is Ruby Bridges?

Ms Bridges was just six years old in November 1960 when she became one of the first black children to go to a white school in the US South.

While the US Supreme Court has already ended racial segregation in public schools in 1954, it faced resistance in some states, including Louisiana.

In 1960 public schools in New Orleans were forced to integrate black students.

Ms Bridges was protected daily by federal marshals when attending first grade. She was the only black pupil there and faced angry crowds outside William Frantz Elementary School near her home.

Only one teacher was willing to accept the young girl and she spent the year as a lone student.

Her experience inspired a famous painting by American artist Norman Rockwell, which was hung for a while at the White House by then-President Barack Obama.

“The girl in that painting at six years old knew absolutely nothing about racism – I was going to school that day,” she said in 2011.

“But the lesson that I took away that year, in an empty school building, was that none of us know anything about disliking one another when we come into the world. It is something that is passed on to us.”