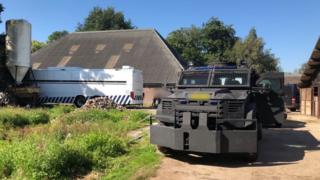 A cocaine laboratory that police say is the Netherlands’ biggest has been discovered in a former riding school.

Dutch police raided the facility in the country’s rural north on Friday, and arrested at least 17 suspects.

“This is the largest cocaine laboratory ever found in the Netherlands,” police chief Andre van Rijn said, adding that it could produce 150-200kg (330-440lbs) of cocaine a day.

This estimate, Mr van Rijn added in the statement released on Tuesday, was based on “the number of people who worked there, the installation, the size, the layout and the equipment” found in the converted stables in Nijeveen.

As well as the equipment and tens of thousands of litres of chemicals, officers said they found 100kg of cocaine base at the stables.

They also found 120 tonnes of what they described as “carrier material” in the central city of Apeldoorn. This was described as mostly clothing which can be laced with cocaine. The drug is then removed in a chemical process once at its destination.

Officers arrested 16 of the suspects at the former stables in Nijeveen, one of whom is the owner of the site. A 17th suspect was arrested in Apeldoorn.

The majority of the suspects are Colombian passport holders.

They are scheduled to appear before a judge on Wednesday and Thursday this week.