Following the federal government’s throne speech and the prime minister’s nationally-televised address, the Liberals have enjoyed a predictable, if not modest, bounce in the opinion polls.

Breaking a months-long stalemate between the Grits and Tories, Justin Trudeau and the Liberals have moved five points ahead of Erin O’Toole and the Conservatives, and now sit at 36 per cent of the decided popular vote, nationally, according to recent Ipsos polling for Global News.

Normally, 36 per cent of the national popular vote would be quite a bit shy of the 39 per cent to 40 per cent of the vote minimally required to be in majority territory during an election.

But the Liberal vote has become more efficient in recent years, winning 157 seats on just 33 per cent of the national vote in 2019, and placing them only 13 seats shy of the required 170 for a majority.

There are three sunny spots for the Liberals in this most recent polling.

First, the Liberal lead over the Conservatives in seat-rich Ontario has grown to 12 points, something which demonstrates that the Liberals are competitive in places like the 905 region around the Greater Toronto Area, and in Southwestern Ontario in cities such as Hamilton, London and Kitchener-Waterloo, in addition to owning Toronto proper.

Second, in British Columbia, the Liberals have a double-digit lead over second-place Conservatives and would be poised to pick up seats in Canada’s third most populous province.

Third, the Liberals have — at least temporarily — dethroned the Conservatives among Canadians aged 55 and older. While this group has traditionally been solidly in the Conservative camp, they appear to have been wooed by the prime minister’s plans for the future, at least until such time as there is a price tag associated with his plans. 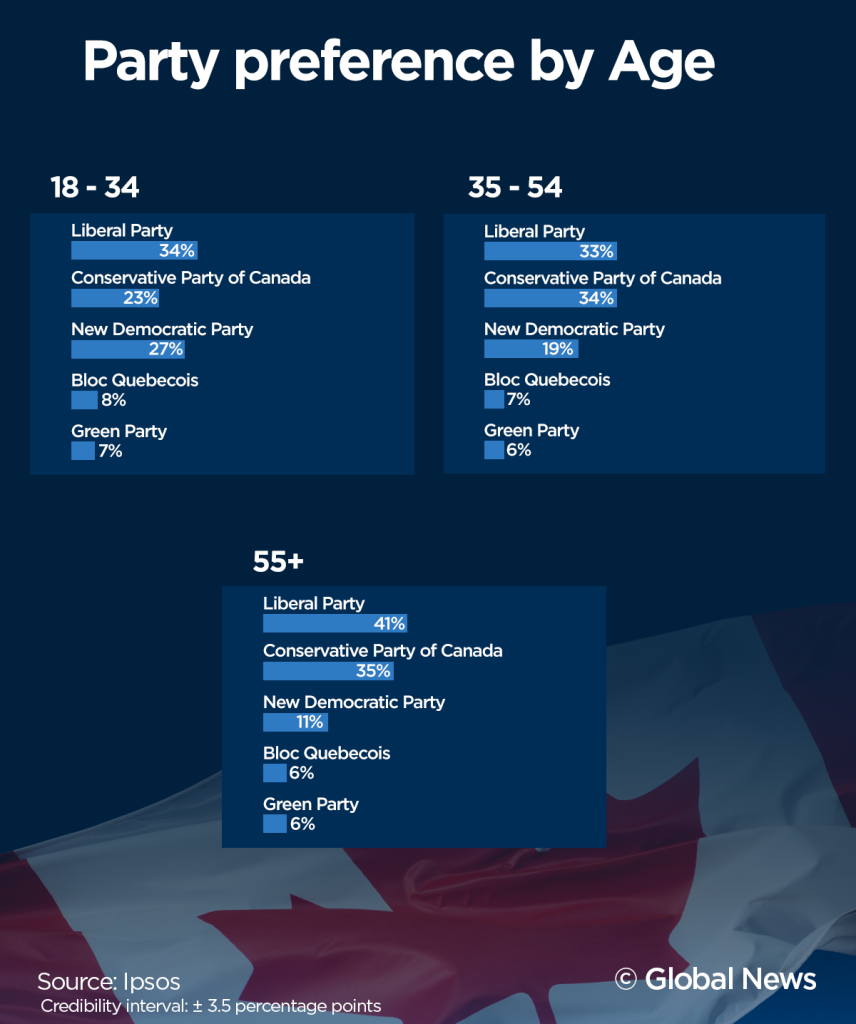 The confluence of these three areas of fortune would normally put the Liberals’ chances at a majority government quite high.

But there remains one major hurdle which, at present, would prevent the Liberals from achieving a majority victory in an election: Quebec.

With urban Ontario and B.C. providing the backbone of support for the Liberals, the difference between a minority and a majority government lies in the number of seats the Liberals can win in Quebec. In order to have a shot at a majority, they would need to retain their 35 seats in la belle province, while building on their representation in Ontario and B.C.

However, given these recent numbers, the Liberals would likely lose seats in Quebec.

In the 2019 federal election, the Liberals won a plurality of seats in Quebec with 34 per cent of the provincial popular vote. But they presently sit at just 29 per cent of the vote, statistically tied with the Bloc Quebecois.

The Conservatives, at 20 per cent, are improving on their 13 per cent showing within Quebec in 2019.

Given that the Liberals won eight seats in Quebec with a margin of victory of less than five percentage points, even a modest decline in their popularity within Quebec would have significant consequences on their seat count, and would make achieving 170 seats nationally very difficult. The Conservatives and Bloc would be co-beneficiaries of the spoils of Liberal losses.

While an election is always a possibility in a minority situation — sometimes planned, sometimes by accident — the Liberals appear to have averted an election for now by courting the NDP with a guarantee to increase Employment Insurance benefits. The Liberals were quick to make a deal, likely already knowing that the path to a majority mandate was unclear, even with a slight bounce following the Throne Speech.

The data is clear that no one party would benefit substantially from a fall 2020 election, and that the composition of Parliament after an election would likely look very similar to its current composition. The parties are aware of this reality, which is why there won’t be an election.

But in a new year with a new budget, with the Liberals having led a minority government for 18 months, and a full year of COVID-19 upon which to reflect, the election rhetoric will be fierce.

METHODOLOGY: This Ipsos poll was conducted online between Sept. 29 and Oct. 1, 2020. Quotas and weighting were employed to ensure that the sample’s composition reflects that of the Canadian population according to census parameters. The precision of Ipsos online polls is measured using a credibility interval. In this case, the poll is accurate to within ±3.5 percentage points, 19 times out of 20, had all Canadians aged 18 and over been polled. The credibility interval will be wider among subsets of the population. All sample surveys and polls may be subject to other sources of error including, but not limited to, coverage error and measurement error.