An outbreak of coronavirus that infected more than 1,500 people at a German slaughterhouse may have been spread by “circulating air”.

Experts fear COVID-19 can be spread inside facilities like the Toennies meat plant in Guetersloh because of the systems they use to pump out cool, moist air inside enclosed rooms.

Martin Exner, director of the Institute for Hygiene and Public Health at the University of Bonn, said: “What has not been known so far is that under such conditions circulating air can keep an aerosol moving.

“And that this is another risk factor that has been overlooked so far. That is the crucial message I have to report here now.”

Mr Exner said outbreaks at meat plants in Germany, the US, Britain and France showed the need to reconsider how such factories are set up.

“I think this will have a lot of consequences for the meat processing and poultry processing industry,” he said.

Meanwhile authorities in North Rhine-Westphalia, Germany’s most populous state, have faced criticism over their handling of the outbreak at the slaughterhouse 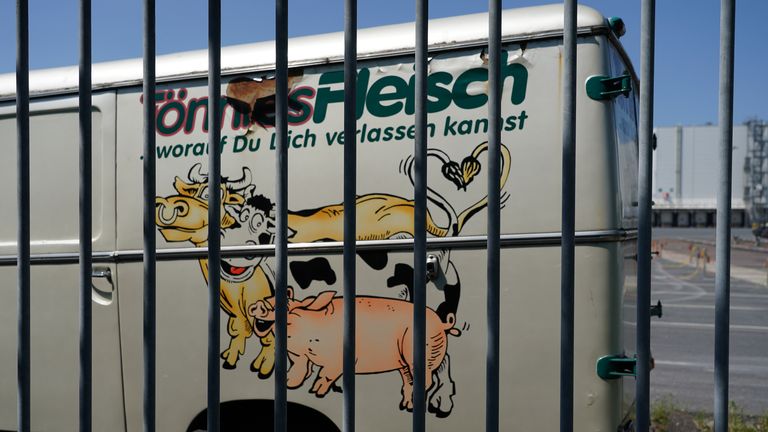 Lockdown measures have been reimposed in Guetersloh and neighbouring Warendorf, which are home to 670,000 inhabitants.

But critics argue governor Armin Laschet should have acted sooner.

“The state could have used a government that intervened quickly and decisively, and didn’t wait a week to prevent a second wave of infections rolling over all of Germany and Europe.

“Now we can only hope that it is not already too late.”

Mr Laschet, who is also a contender for the leadership of chancellor Angela Merkel’s centre-right party – and possibly to succeed her as Germany’s leader – has been a vocal advocate of easing coronavirus restrictions.

Abour 600 tests have been carried out in the region on people who did not work at the slaughterhouse.

And of the 230 results already received, 229 were negative and in the remaining case the result was unclear.

Sven-Georg Adenauer, the head of the regional administration in Guetersloh, said the results provided “a small glimmer of hope that the virus hasn’t passed into the population”.