It is the third highest behind the US and Brazil, but experts believe the true number is much higher.

India’s coronavirus surge has been showing signs of improvement in cities such as New Delhi and Mumbai but is still causing a terrible toll in rural areas.

While average deaths and cases have decreased slightly in the past few weeks, numbers remain worryingly high and another 222,315 infections were reported on Monday.

Vaccinations have also slowed recently and many states say they don’t have enough.

India has fully vaccinated around 41.6 million people – just 3.8% of its population – despite being the world’s biggest producer of vaccines.

Many people in India have been forced to source their own oxygen amid chronic shortages that have seen hospitals swamped by patients.

But it is the vast countryside, where healthcare is often very poor, that is now suffering the worst. 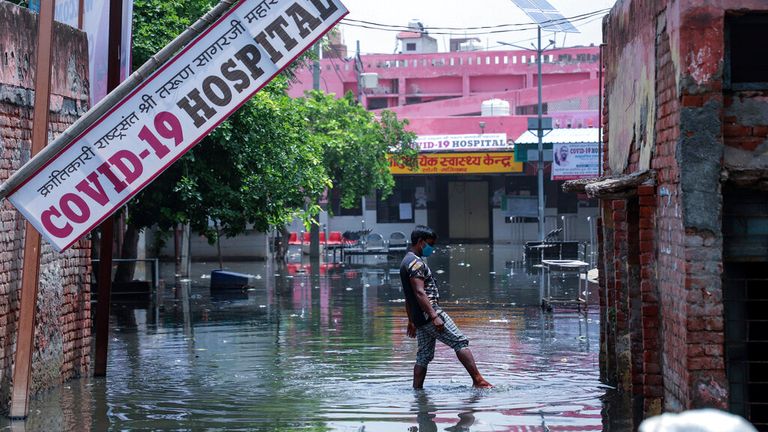 Hundreds of bodies – feared to be COVID victims – have washed up on the banks of the Ganges in Uttar Pradesh state in recent weeks and others have been found buried in shallow graves.

A fatal fungal infection affecting coronavirus patients and those who have recovered is providing another challenge.

Mucormycosis, also known as black fungus, is caused by exposure to a mould often found in soil, air and human mucus.

It spreads through the respiratory tract and erodes facial structures. Doctors sometimes have to remove the eye to stop it reaching the brain.

Nearly 9,000 cases have been reported so far, said federal minister Sadananda Gowda on Saturday, leading to a shortage in the drug used to treat the condition.

Local media said more than 250 had died because of the disease.