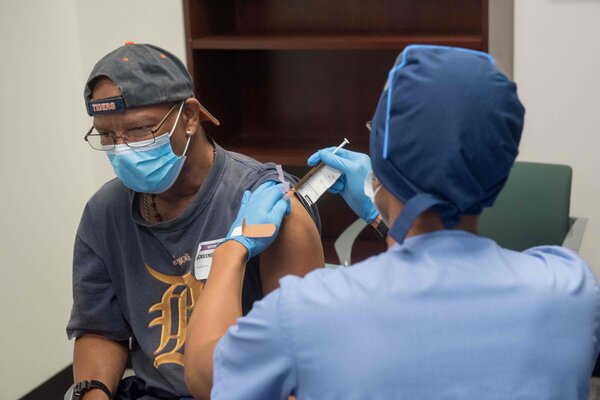 C.D.C. tells health officials to be ready to distribute a vaccine by November, raising concerns over politicized timing.

The Centers for Disease Control and Prevention has notified public health officials in all 50 states and five large cities to prepare to distribute a coronavirus vaccine to health care workers and other high-risk groups as soon as late October or early November.

The new C.D.C. guidance is the latest sign of an accelerating race for a vaccine to greatly ease a pandemic that has killed more than 184,000 Americans. The documents were sent out last week, the same day that President Trump told the nation in his speech to the Republican convention that a vaccine might arrive before the end of the year.

Over the past week, both Dr. Anthony S. Fauci, the country’s top infectious disease expert, and Dr. Stephen Hahn, who heads the Food and Drug Administration, have said in interviews with news organizations that a vaccine could be available for certain groups before clinical trials have been completed, if the data were overwhelmingly positive.

Public health experts agree that agencies at all levels of government should urgently prepare for what will eventually be a vast, complex effort to vaccinate hundreds of millions of Americans. But the possibility of a rollout in late October or early November has also heightened concerns that the Trump administration is seeking to rush the distribution of a vaccine — or simply to suggest that one is possible — before Election Day on Nov. 3.

“This timeline of the initial deployment at the end of October is deeply worrisome for the politicization of public health and the potential safety ramifications,” said Saskia Popescu, an infection prevention epidemiologist based in Arizona. “It’s hard not to see this as a push for a pre-election vaccine.”

Three documents were sent to public health officials in all states and territories as well as New York, Chicago, Philadelphia, Houston and San Antonio on Aug. 27. They outlined detailed scenarios for distributing two unnamed vaccine candidates — each requiring two doses a few weeks apart — at hospitals, mobile clinics and other facilities offering easy access to the first targeted recipients.

The guidance noted that health care professionals, including long-term-care employees, would be among the first to receive the product, along with other essential workers and national security employees.

People aged 65 or older, as well as those from “racial and ethnic minority populations,” Native Americans and incarcerated individuals — all communities known to be at greater risk of contracting the virus and experiencing severe disease — were also prioritized in the documents.

The National Academies of Sciences, Engineering and Medicine unveiled a 114-page plan on Wednesday, sponsored by the C.D.C. and the National Institutes of Health, that proposed a complicated four-phase system for priority.

The C.D.C. noted in its guidance that “limited Covid-19 vaccine doses may be available by early November 2020.” It also said its plans were still hypothetical, noting, “The Covid-19 vaccine landscape is evolving and uncertain, and these scenarios may evolve as more information is available.” A C.D.C. spokeswoman confirmed that the documents were sent but declined to comment further.