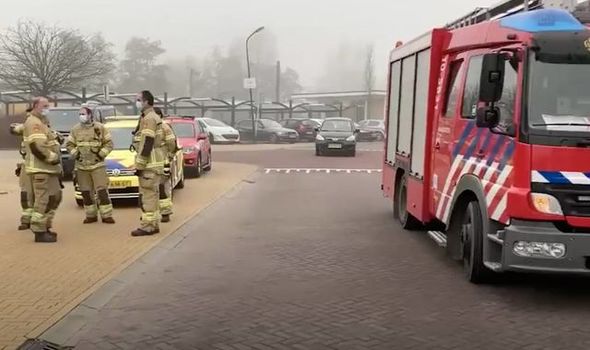 Police said windows in the building were destroyed after the blast in Bovenkarspel on Wednesday morning. Nobody was injured, but police were still investigating what had caused the early-morning blast. Police said in a statement: “An explosion went off at 6.55am. Windows were destroyed, no injuries. The police are investigating. The perimeter has been cordoned off.”

Footage of social media showed fire crews at the scene as a cordon was in place around the building following the explosion.

Maarten Edelenbosch, Investigative reporter at North Holland News, posted a picture of the fire brigade at the scene.

He wrote on Twitter: “It is unclear to me why, but the fire brigade has just arrived at the test street in Bovenkarspel where the explosion took place.”

NH News described the test centre as a factory, where cars would drive to for testing.

The radio channel reported: “It is a huge building.

“I would almost call it a factory.

“You can drive your car in to be tested and then out the other side.”

All test appointments in Bovenkarspel that were scheduled until 12pm have been canceled.