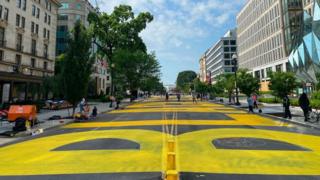 The Washington DC mayor has changed the name of a plaza outside the White House to “Black Lives Matter Plaza” in a rebuke to President Trump.

The mayor’s defiant, but largely symbolic acts come as more protests are expected in DC at the weekend.

The demonstrations staged over the past week in Washington drew draconian responses from the White House, with Mr Trump ordering thousands of federal troops into the city.

The president was criticised for ordering authorities to forcibly remove peaceful protesters from a square outside the White House so he could cross the street to take a photo in front of a church.

Marking the square in front of St John’s Church with the new “Black Lives Matter Plaza” sign on Friday, Ms Bowser said: “As Washingtonians, we simply all want to be here together in peace to demonstrate that in America, you can peacefully assemble, you can bring grievances to your government, and you can demand change”.

The mayor also tweeted a video clip of the giant “Black Lives Matter” street mural emblazoned on the road in front of the White House in bright yellow paint.

“There was a dispute this week about whose street this is,” the mayor’s chief of staff John Falcicchio tweeted as the mural was unveiled.

“Mayor Bowser wanted to make it abundantly clear that this is DC’s street and honour demonstrators who were peacefully protesting on Monday evening.”

But the move by the mayor was panned by the local chapter of the Black Lives Matter Global Network, which called it “a performative distraction from real policy changes” and a way “to appease white liberals while ignoring our demands”.

What else has the mayor done?

Ms Bowser wrote on Thursday to Mr Trump, asking him to “withdraw all extraordinary federal law enforcement and military presence from Washington DC.”

Her letter notes that the curfew in Washington has been lifted as of Friday morning, and that the city police are capable of dealing with the remaining peaceful protests.

“The deployment of federal law enforcement personnel and equipment are inflaming demonstrators and adding to the grievances of those who, by and large, are peacefully protesting for change and for reforms to the racist and broken systems that are killing Black Americans,” Ms Bowser wrote.

She also criticised troops for not wearing any identification, allowing them operate outside “established chains of commands,” she said.

“This multiplicity of forces can breed dangerous confusion, such as when helicopters are used in a war-like tactic to frighten and disperse peaceful protestors,” Ms Bowser wrote.

“My view is that law enforcement should be in place to protect the rights of American citizens, not restrict them.”

Ms Bowser has repeatedly clashed with the White House since peaceful protesters were cleared from Lafayette Square Park – outside the White House – on Monday so Mr Trump could visit a church. She called the decision to use violence on the protesters “shameful”.

She also threatened to take legal action against his administration his week after Trump officials floated the idea of taking control of the Washington DC police force.

According to the Washington Post, at least 16 law enforcement and military agencies have sent armed personnel to Washington.

Troops from the Department of Homeland Security, the FBI, Immigration and Customs Enforcement (Ice), the Army and National Guard are among those who have faced off with protesters in the past week.

Washington DC is not a state, and the mayor does not have the same power as a state governor who can decide when and how to deploy National Guard troops.

The Washington DC National Guard report directly to the Secretary of the Army.

A mayor lashes out

Mayor Bowser has taken a strong stance against the president, denouncing his decision to bring National Guard units into Washington.

In a letter to the president, she described federal law-enforcement officers and the National Guard units in the city as “extraordinary” and demanded that they leave. She has also said there is a “legal question” about whether the president can deploy the troops here.

However, it was unclear whether there really is legal backing to her claim. She is a Democratic mayor in a largely Democratic city, and she is popular among her constituents. When she says the troops should not be on Washington streets, she is expressing an opinion held by many of the people who live here.

Washington is a federal city, though, and federal authorities have significant power in this town.

For that reason, she does not have much legal recourse. In truth, she has little power and most likely she will have to stand by and watch the president’s plans unfold – like the others who live here.