Amid a global food crisis, Ukrainian farmers have battled to save vast amounts of wheat set ablaze by an attack from Russian forces. Frantic workers have been captured on video attempting to extinguish a wall of fire rapidly spreading across a field of produce. Additional Ukrainian workers have been filmed desperately harvesting patches of the crop in an effort to salvage produce that has escaped the flames. Ukraine’s First Deputy Minister of Foreign Affairs Emine Dzheppar shared the footage, branding President Putin’s Russia a terrorist state.

The blaze was recorded in the Mykolaiv region of southern Ukraine, close to the Black Sea.

The city, usually a vital transportation hub within Ukraine, has already struggled to move produce throughout the country and export internationally given Russian blockades on essential ports.

Despite the continued difficulties in food supply and trade, Ukrainians have remained resilient against Russian efforts to destroy produce as workers battled the blaze to prevent wasted crops.

Ms Dzheppar said: “Ukrainians are fighting the fires on a grain field caused by Russia’s attack while the harvester is harvesting crops at the same time.” 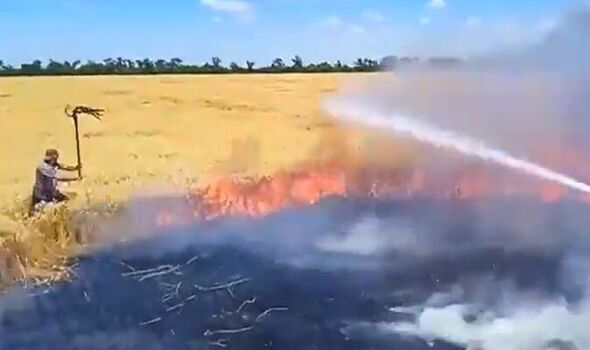 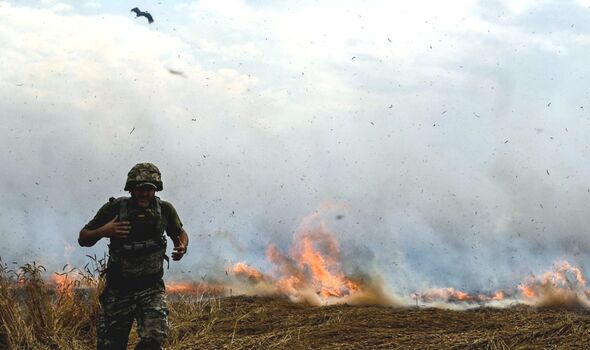 Moscow’s effort to disrupt the global food supply had been condemned by international leaders as Russian tactics threaten to worsen the world food crisis.

Ukraine is typically a huge exporter of wheat, among other key produce, to nations across the globe.

However, a Russian blockage of crucial Black Sea ports has had dire impacts on Ukraine’s ability to engage in trade as nations have been warned the action could result in critical food shortages.

A statement from humanitarian aid organisation International Rescue Committee warned: “This blockade will cause global food prices to rise even further and may push countries in East Africa such as Kenya, Somalia and Ethiopia – which depend on Russia and Ukraine for 90 percent of their wheat and are already facing a record drought – into famine.” 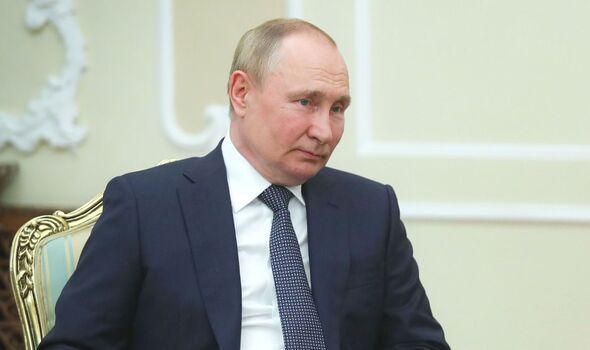 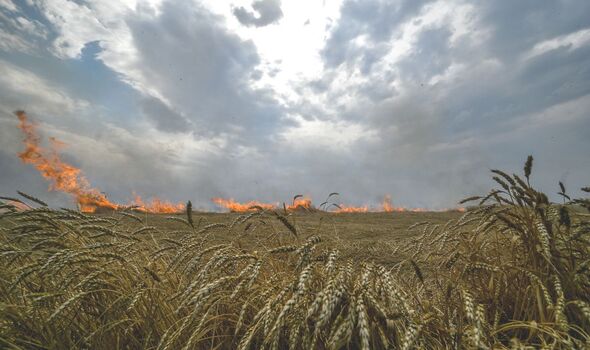 The European Union has urged Russia to end the export blockade as Europe is in the midst of a cost of living crisis, worsened by the invasion of Ukraine.

EU Foreign Policy Chief Josep Borrell has said: “One cannot imagine that millions of tonnes of wheat remain blocked in Ukraine while, in the rest of the world, people are suffering hunger.”

He added: “This is a real war crime.” 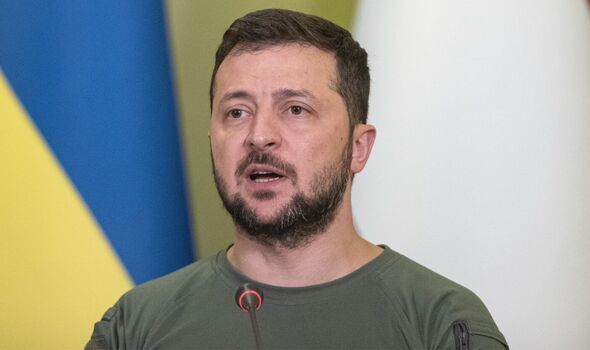 The Kremlin has repeatedly denied responsibility for the global food shortage while also refusing to ease Russian control over export routes.

Discussions on the blockade have been launched between Ukrainian and Russian officials, with the involvement of authorities from Iran and Turkey within the negotiations.

Volodymyr Zelensky sparked hope in an address last week with the suggestion that officials from both Ukraine and Russia were nearing a deal to end the blockade.

President Zelensky said: “The Ukrainian delegation has reported to me that there is progress. In the coming days, we will agree on the details with the UN secretary-general.”