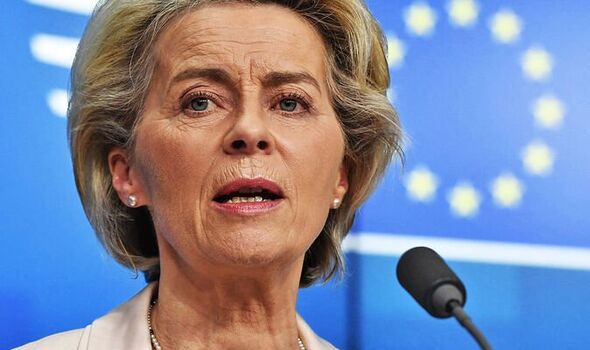 Ursula von der Leyen, president of the European Commission, said planned measures include an import block on coal and a ban on Russian ships and road operators.

And the EU is also finally preparing possible sanctions against Russian oil and gas should Moscow’s troops continue to commit their war crimes and genocide.

He described how in the capital’s satellite town of Bucha this week he saw evidence of the carnage.

They included an old woman lying dead while a car with a white flag and the word “children” on the side had been shot at with blood visible.

Ms Von der Leyen said : “We saw the gruesome pictures from Bucha and other areas from which Russian troops have recently left. These atrocities cannot – and will not – be left unanswered.

“The four packages of sanctions have hit hard and limited the Kremlin’s political and economic options. In view of events, we need to increase our pressure further.

But Brussels stopped short of sanctions on oil or gas despite the intense pressure to inflict more pain on the Kremlin.

EU nations are split on the issue amid fears it would plunge the continent into an energy crisis.

Germany, which had previously blocked efforts to embargo Russian energy, is ready to consider a coal ban and is in discussion with the EU about the timing of such a move.

Ms Von der Leyen said the 27-nation bloc will suspend imports of Russian wood and cement too, as well as seafood and liquor, worth £4.6 billion annually in all.

She said the EU is working on additional sanctions and “reflecting on some of the ideas presented by the member states, such as taxes or specific payment channels”.

But the measures will be triggered only if the war escalates further.

Germany relied on Russian for 55 percent of its gas last year while for the EU as a whole it was 40 percent.

British Foreign Secretary Liz Truss claimed sanctions are having a “crippling impact” and they are “pushing the Russian economy back into the Soviet era”.

She pushed for leaders in the West to agree a “clear timetable to eliminate our imports of Russian oil, coal and gas”.

She will use a meeting of allies tomorrow to press for further sanctions on Russia. Ms Truss added: “I will be urging our Nato and G7 partners to join us in banning Russian ships from our ports, cracking down on more Russian banks, going after industries, like gold, and agreeing a clear timetable to eliminate our imports of Russian oil, coal and gas.”

Russia makes £16.67 million a day from coal compared to £708 million from oil and gas. Energy policy expert Simone Tagliapietra said the coal ban is important but not a “game changer” and added: “The big flow of money is oil and gas.”