A request to illuminate the Allianz Arena in rainbow colours for Germany’s final Euro 2020 group stage match against Hungary has been turned down by UEFA.

Munich mayor Dieter Reiter had said he wanted to light up the city’s stadium in the colours on Wednesday in protest against a new law in Hungary.

The legislation bans gay people from appearing in school educational materials or programmes for under-18s.

And it outlaws content in schools deemed to promote homosexuality and gender change.

UEFA turned down Mr Reiter’s request because it believes the gesture has a political context.

European football’s governing body has instead proposed alternative dates for the stadium, home to Bayern Munich, to be lit up in rainbow colours.

“Racism, homophobia, sexism, and all forms of discrimination are a stain on our societies – and represent one of the biggest problems faced by the game today,” a UEFA statement said.

“Discriminatory behaviour has marred both matches themselves and, outside the stadiums, the online discourse around the sport we love.

“However, UEFA, through its statutes, is a politically and religiously neutral organisation. Given the political context of this specific request – a message aiming at a decision taken by the Hungarian national parliament – UEFA must decline this request.” The German Football Association (DFB) had said on Monday it would also prefer any protest or gesture to be held on a date other than Wednesday.

Anti-discriminatory group Fare sent a report highlighting an alleged homophobic banner in the stands during the 3-0 defeat by Portugal in Budapest on 15 June.

Racist chants were also reportedly heard during Hungary’s 1-1 draw with France on 19 June. 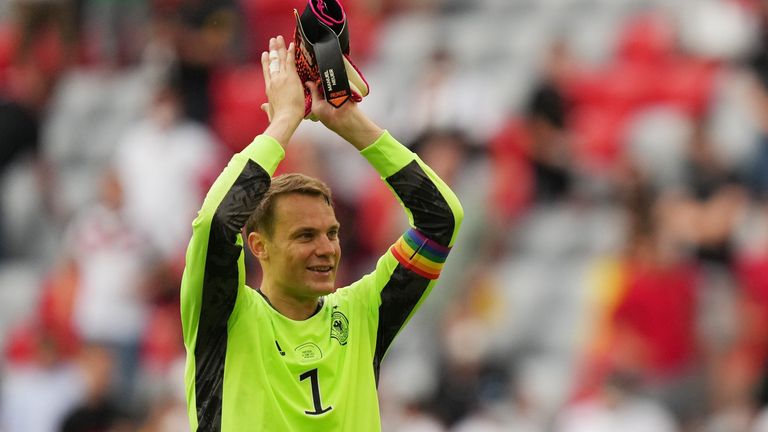 UEFA investigated whether the move could be interpreted as political and found Neuer should not face disciplinary action as he was “promoting a good cause”.