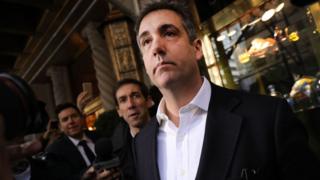 President Donald Trump’s ex-lawyer Michael Cohen has been released from prison to home confinement due to Covid-19 concerns.

Cohen, 53, is serving a three-year sentence for lying to Congress and campaign finance fraud.

His early release was first reported in April, but it was delayed.

New York is the epicentre of the US pandemic and the minimum-security prison where Cohen is detained has had a number of confirmed cases.

According to the federal Bureau of Prisons, 2,265 inmates and 188 staff have tested positive for Covid-19 nationwide. There have been 58 inmate deaths due to the virus.

Cohen said on Twitter on Thursday, following his release, that he was “so glad to be home and back with my family”.

“There is so much I want to say and intend to say. But now is not the right time. Soon. Thank you to all my friends and supporters.”

Earlier this month, another former Trump aide, ex-campaign chairman Paul Manafort, was released from prison to serve the remainder of his custodial term at home due to Covid-19 fears.

Manafort, who was convicted of conspiracy and fraud charges, had served a little over a year of his seven-and-a-half year sentence.

Cohen – who was originally due to walk free in November 2021 – was expected to remain in quarantine for two weeks before early release.

The former fixer, who once said he would take a bullet for Mr Trump, was the first member of his inner circle to be jailed during a justice department-led inquiry into alleged Russian meddling in the 2016 election.

He admitted to lying to Congress about a Trump Tower project in Moscow, and campaign finance violations for his role in making hush money payments to women alleging affairs with Mr Trump and other tax and bank fraud charges unrelated to the president.